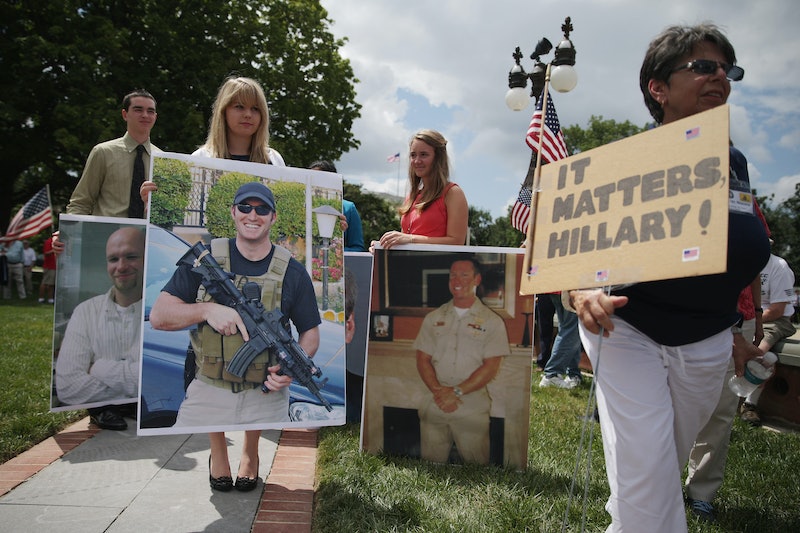 Former Secretary of State Hillary Clinton will testify in front of the House Select Committee on Benghazi Thursday, in a hearing that's expected to last many hours and be highly partisan, since the committee is Republican-controlled. Clinton is expected say that though the 2012 attacks in Benghazi, Libya were a tragedy, diplomats must often work in unstable regions. A number of Republicans have said that targeting Clinton is a part of the investigation's purpose, and this new graphic about the Benghazi investigation shows the insane amount of resources that have been dedicated to what some are calling a "witch hunt."

In September, House Majority Leader Kevin McCarthy said that House Republicans have had few successes recently, and that one of them was using the Benghazi Committee to drive down Clinton’s poll numbers. He backpedaled on the controversial comments, but then Rep. Richard Hanna, a Republican from New York, said last week that "the biggest sin you can commit in D.C. is to tell the truth." In an interview with a radio show in upstate New York, Hanna said he believed McCarthy's statement was at least partially true:

This may not be politically correct, but I think that there was a big part of this investigation that was designed to go after people and an individual, Hillary Clinton. After what Kevin McCarthy said, it’s difficult to accept at least a part of it was not. I think that’s the way Washington works. But you’d like to expect more from a committee that’s spent millions of dollars and tons of time.

And that's what Think Progress' new charts show. The Benghazi committees have spent more time (and possibly more money) investigating this one incident than any other high-profile terror attack involving the U.S. More emphasis has been placed on Benghazi than even on the Sept. 11, 2001 attacks.

The charts show the number of congressional committees and congressional hearings dedicated to investigating each of the attacks. The 1998 U.S. embassy bombing, which killed 224 people, and the 1996 Oklahoma City bombing, which killed 168 people and injured 680 others, did not generate any formal congressional investigations. Again, four Americans were killed in the attacks on Benghazi, and independent investigations have already disproved accusations that the Obama administration didn't respond to intelligence warnings before the attack, or that it covered anything up afterwards.

Despite these investigations, Clinton is still under fire for using her private email server for official State Department communication. All of the investigations of Clinton's emails have not found any wrongdoing, and yet 47 percent of Americans feel that this is an important factor in deciding their vote, according to a new NBC/Wall Street Journal poll.

Though many people believe that the Benghazi investigations should've come to an end long ago, it's unclear just how much longer they will continue. Which is troubling, given Think Progress' evidence that investigations into larger terror attacks have used less time and fewer resources.