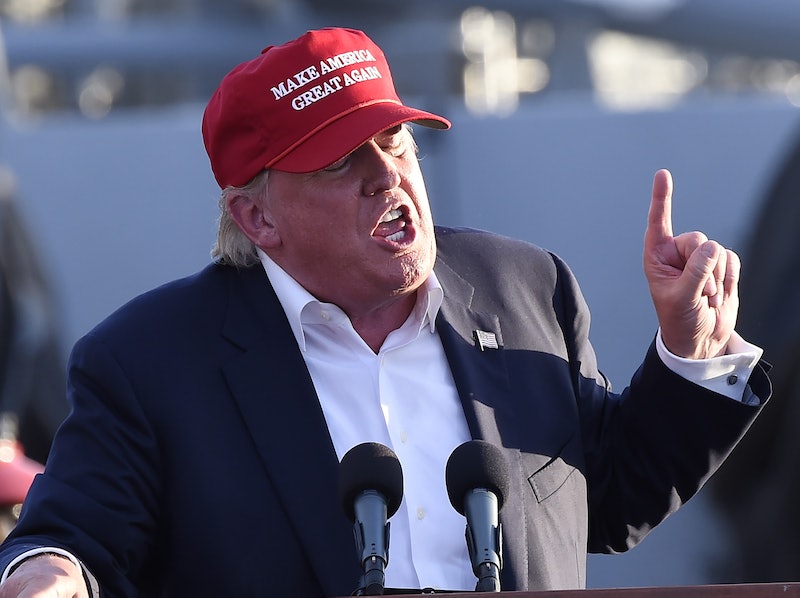 Donald Trump's campaign slogan and conservative battle cry (which we can't seem to stop hearing him spout) since he launched his presidential campaign over the summer is "Make America Great Again." Ronald Reagan used the same slogan in the '80s, and it was just as problematic then as it is now. Twitter is happy to point out the slogan's shortcomings, of course. The hashtag #WhenAmericaWasGreat popped up Wednesday evening, initiated by people who bemoan the bygone days when nobody got called out for the part they play in the oppressing others.

Thankfully, there were also plenty of people out there on Twitter who realize how wrong it is to yearn for the days when oppression was at its peak, and they started laying down the truth about "#WhenAmericaWasGreat." Those who rightly disagree with the racist, sexist, and homophobic sentiments espoused by those who started the hashtag are taking over it in the best way.

The fact is that America has been rife with problems that have adversely influenced the lives of millions of people of color, women, poor people, gay people, and the indigenous people who were occupying the U.S. before it was colonized by Europeans. We need to rethink the "greatness" of America's past, and avoid slipping backwards, given that ongoing fights for social and civil rights are already so long and difficult. The hashtag began as a ridiculous platform for people to "complain" about B.S. like this:

Yeah ... So, noticing the complete whitewashing of our history and the ignorance surrounding the many who have suffered while white men have thrived, the hashtag got taken over in a really powerful (and more historically accurate) way. Here are some of the best tweets from Twitter users who took over #WhenAmericaWasGreat.

As a society, we need to be willing to have conversations about the negative aspects of our past (many of which are still prevalent in the present day), regardless of how uncomfortable they may be. Perhaps even especially because they are uncomfortable. Progress will never be achieved if our leaders and citizens continue to focus on the past.

So all I have to say to anyone who is not in the second camp is this:

And that's putting it as nicely as possible.

Editor's Note: This article has been updated to meet Bustle's editorial standards.