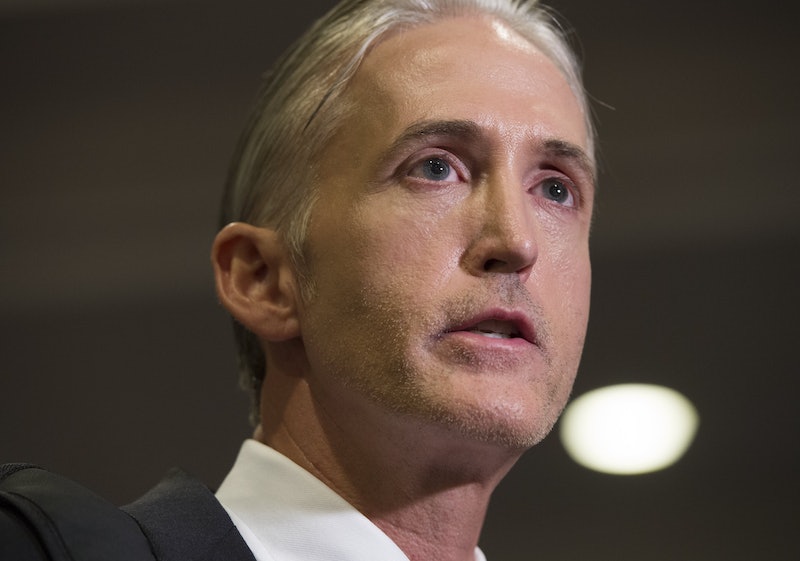 As Hillary Clinton faces the House Select Committee on Benghazi to give her testimony Thursday, she won't be the only person at the hearing to watch and scrutinize. All eyes will also be on Trey Gowdy, the chairman of the committee and a breakout star in the conservative movement to "expose" Clinton's role in the Benghazi attacks. But aside from being the man who is leading the questioning, just who is Trey Gowdy? The Republican representative has been instrumental in the ongoing investigation, and was personally responsible for introducing one of Clinton's toughest campaign obstacles so far. And judging by his impressive resume of accomplishments, he might be a worthy adversary.

It remains to be seen whether Clinton will crack under the questioning, or if something previously concealed will be revealed, but Gowdy will certainly do his part to reach this end. The committee leader called for an all-day session, during which he will test her answers against roughly 50,000 emails and the testimonies of more than 50 State Department, CIA, and Pentagon officials. If you mute out all the surrounding noise — talk of campaign sabotage, Clinton's position in the polls, other Republicans' trumped-up accusations, etc. — you could essentially boil this hearing down to a showdown between two people: Clinton and Gowdy.

To get a better sense of Clinton's adversary, here are eight things about the South Carolina representative you might not have known.

Though many were aware that Clinton used a private email server to conduct official business, it was Gowdy who announced to the public that she had wiped that server clean.

He Used To Be A Federal Prosecutor

Before entering Congress, Gowdy was a federal prosecutor for six years, handling cases that ranged from narcotics trafficking to child pornography. He successfully prosecuted J. Mark Allen, an "America’s Most Wanted" suspect, and was awarded the Postal Inspector’s Award as a result.

Before Leading The Benghazi Committee, He Was On The House Oversight Committee

In addition to the Benghazi committee, which he was elected to in May 2014, Gowdy has also served on the House Committees on Ethics, Oversight and Government Reform, and Judiciary.

He's A Member Of The Tea Party

Gowdy was elected to Congress in 2010, when the first wave of the tea party movement swept through the Republican party. In line with the tea party's principles, Gowdy firmly believes in a limited government.

In the last few weeks, many of Gowdy's conservative allies have spoken out to endorse him for House Majority Leader, including Rep. Mia Love (R-Utah) and Rep. Jason Chaffetz (R-Utah), who told Fox and Friends:

Trey Gowdy as majority leader would be heaven-sent.

Gowdy's response to both drafts?

I've never run for any leadership position, and I'm not going to start now. Don't know how I can be any more definitive.

The Washington Post called Gowdy "an intense and popular South Carolinian who avoids personal attention from the media."

He Told His Own Party To Shut Up

When House Majority Leader Kevin McCarthy made remarks that suggested the committee's efforts were a politicized tactic to sabotage Clinton's campaign, Gowdy shot back with this:

I have told my own Republican colleagues and friends shut up talking about things you don't know anything about. Unless you're on the committee, you have no idea what we've done, why we've done it, and what new facts we have found.