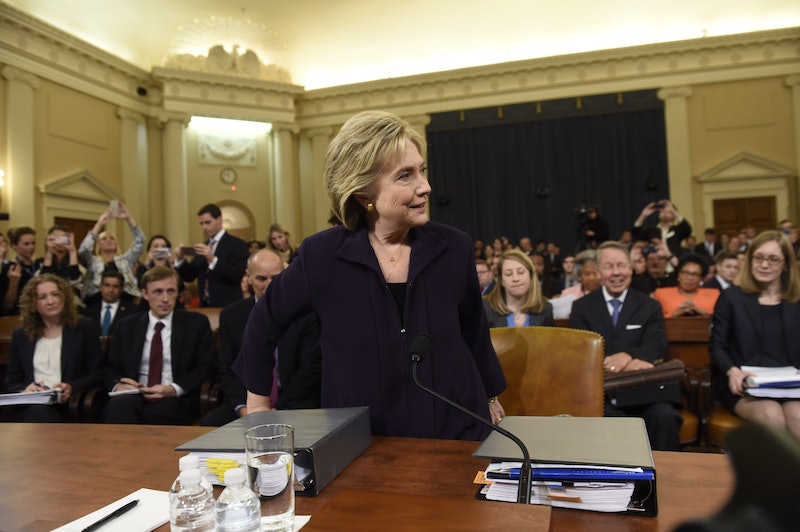 Thursday's hearing before the House Select Committee on Benghazi has included plenty of pointed jabs so far. But one of the most heated back-and-forth conversations didn't even include former Secretary of State and 2016 presidential hopeful Hillary Clinton. Instead, South Carolina Rep. Trey Gowdy, the Republican in charge of the committee, sparred briefly with ranking member Elijah Cummings, a Democratic representative from Maryland. Gowdy and Cummings' heated exchange at the Benghazi hearing perfectly illustrates just how partisan the discussion of the 2012 events in Libya has become.

CUMMINGS: Will the gentleman yield?

GOWDY: I'll be happy to, but you need to make sure the entire record is correct.

CUMMINGS: Yes. And that's exactly what I want to do.

GOWDY: Well, then, go ahead.

CUMMINGS: I'm about to tell you.

The committee hearing, during which Clinton is testifying, is focused on the security at a U.S. diplomatic outpost in eastern Libya. In September 2012, four Americans died, including two CIA personnel, a diplomat, and Ambassador to Libya J. Christopher Stevens. Many Republicans blame the State Department and/or Clinton herself for the attacks. While the focus of Thursday's hearing isn't on Clinton's use of a private email server — which was first discovered by the Benghazi committee — some committee members have asked Clinton about her emails. Namely, the Republican representatives want to know why she didn't send and receive more emails about the U.S. outpost in Benghazi. (Clinton's response? "I did not have a computer, and I did not conduct most of my work on email.")

After Clinton defended herself, Cummings went on the attack against Gowdy in response to his questions about emails from Sidney Blumenthal, a longtime confidant of Clinton and a former aide to Bill Clinton. Gowdy asked Clinton whether she solicited advice from Blumenthal over email, suggesting that Clinton neglected to mention Blumenthal's name in discussions with the State Department. Clinton responded that Blumenthal sent her more information than she had asked for, and that she used some of his suggestions and disregarded other suggestions he'd made.

"What is relevant is that he was sending information to the secretary of state," Gowdy said at the hearing, suggesting that Clinton shouldn't have been taking advice from someone with little background in security, even if she hadn't explicitly asked him for the advice. As The New York Times notes, Gowdy suggested that Blumenthal was in touch with Clinton more than Ambassador Stevens was.

But Cummings was quick to knock Gowdy, asking him to release the full transcript of Blumenthal's testimony on Benghazi during a private interview in June. "What do you have to hide?" Cummings angrily asked Gowdy, adding that he should "just put the entire transcript out there and let the world see it." Gowdy responded to Cummings as they interrupted each other, saying that the issue of Blumenthal's transcript would be discussed at a later committee meeting. "If you think we've heard about Sidney Blumenthal, wait for the next round," Gowdy said.

This isn't the first time Gowdy and Cummings have disagreed, either. On Tuesday, before the hearing started, Cummings wrote a letter asking Gowdy to release Blumenthal's deposition transcript. Now, Cummings is accusing Gowdy of cherry-picking certain emails to present a negative view of Clinton's actions in 2012. We may not know exactly what Blumenthal said about Benghazi in June, but Cumming's and Gowdy's exchange proves that there are two sides to every story — but thanks to partisan politics, we might not see both of them.