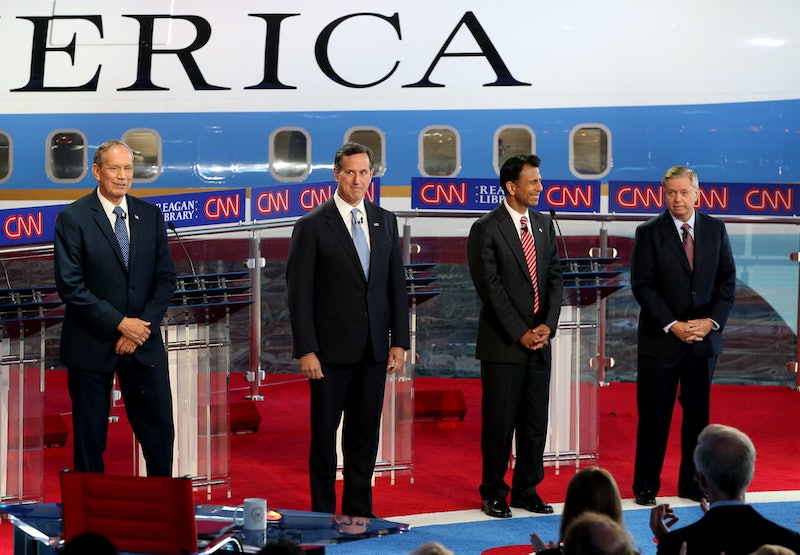 Is it just me, or does it feel like there is always a debate around the corner now? In all fairness, there pretty much always is a debate on the horizon, and it's way too early for true debate fatigue to set in (we're still a few months out from the primaries, after all), so let's set our sights on what's up next. This coming Wednesday, CNBC will host the third Republican presidential debate from the University of Colorado in Boulder. All the usual big name suspects will be fronting the main act at 8 p.m. ET (Trump, Carson, Bush ... you know the drill), but last time Carly Fiorina was a new face during primetime, so who has landed at the kids' table for the third GOP debate?

The JV debate will commence at 6 p.m., and wrap up in time for the primetime debate to kick off. The kids' table crowd has been reduced to four candidates who just don't want to give up on their presidential dreams: Rick Santorum, Bobby Jindal, George Pataki, and Lindsey Graham. All four of these candidates have yet to make it high enough in the polls to show their faces during primetime, but will battle it out with one another once again next week.

In the first Republican JV debate, Fiorina was the candidate who shone, and landed herself a spot in the primetime roster for the second debate. When the Republican candidates met again a second time, Lindsay Graham stole the show from his fellow kid's table candidates. Graham, however, was unable to make gains in the polls sufficient to graduate him to the main debate for round three, which means he could have a chance to stand out again, unless the other three Repubs pull some magic out of their sleeves.

Despite their best laid plans and efforts, Jindal, Santorum, and Pataki have been thoroughly lackluster and forgettable during the JV debates, and there's no tangible reason to believe they will be able to wow voters this time around. However, Graham's performance during the first debate was absolutely terrible, but he managed to really turn it around and dominate when he met with the other second-tier candidates for the second debate. Proof that anything can happen in politics.

As for their standings in current polls, the entire JV roster has ratings below 3 percent in Iowa, according to a new Quinnipiac poll released Thursday. This puts them at least two points below the lowest ranking primetime candidates: Carly Fiorina and Jeb Bush. The Republican field continues to heat up as the number of candidates has begun to thin out, so suffice it to say that all of the second-tier candidates are hoping that the third time will be the charm for their campaigns.