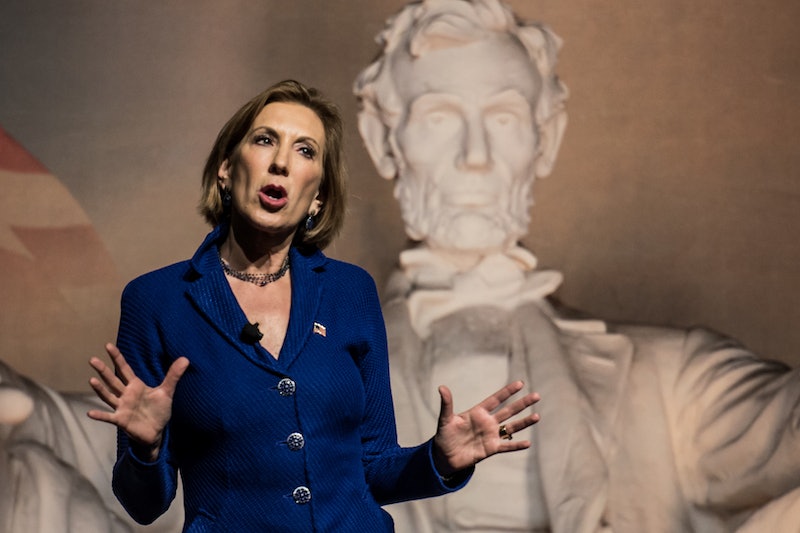 The third debate among Republican presidential hopefuls will take place on Wednesday, and it will focus on matters of the economy. Everyone is looking forward to seeing Donald Trump and Jeb Bush continue to duke it out, of course, but what about the (many) other GOP presidential candidates? There are currently 14 Republican presidential hopefuls who've announced their intentions to run for election in 2016, and not all of them will fit onto a single stage (and have time to express all of their viewpoints). Because of the high volume of candidates, CNBC is dividing Wednesday's events into a primetime debate at 8 p.m. Eastern time and a separate debate at 6 p.m. Eastern time. But unlike at the first Republican debate, GOP presidential hopeful and former Hewlett-Packard CEO Carly Fiorina will be in the primetime debate event.

Both debate events will take place at the University of Colorado's Boulder campus. The GOP candidates with a polling average of at least 3 percent will appear in the primetime debate, and the candidates polling less than that will appear in the 6 p.m. discussion. The earlier debate will include four candidates: Louisiana Gov. Bobby Jindal, former New York Gov. George Pataki, former Pennsylvania Sen. Rick Santorum, and South Carolina Sen. Lindsey Graham. The other 10 (yes, 10!) candidates, including Fiorina, will all be featured in the primetime debate.

Not only will Fiorina participate in the primetime debate, but she's got a pretty prime podium location, too. Fiorina will be next to Carson, complementing Rubio on Trump's side. Fiorina's surge in polling popularity after the second Republican debate, when she stood her ground against Donald Trump, shows that the 2016 presidential race is anyone's game at this point. Who knows — maybe one of the four politicians from the 6 p.m. debate next week will see their popularity increase after the event, too.