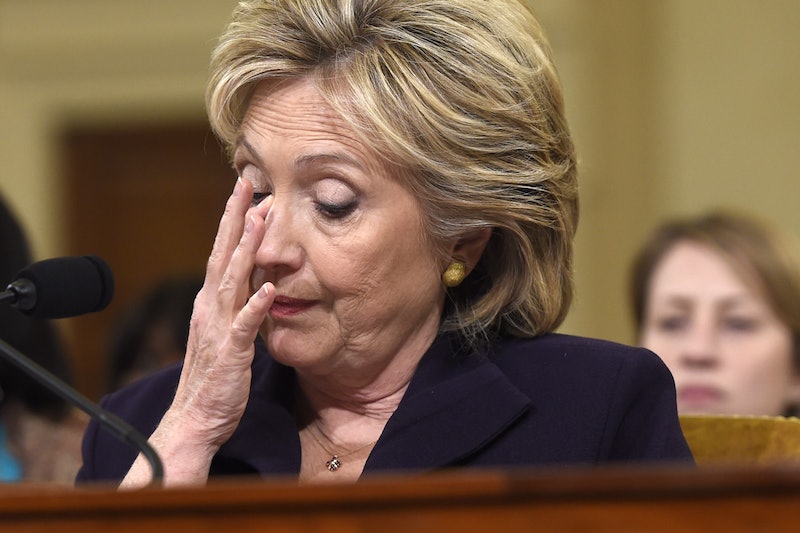 The House Select Committee on Benghazi's questioning of Hillary Clinton continues to drag on into the evening, and it still hasn't revealed anything in the way of new information — other than the fact that Congressmen Trey Gowdy and Elijah Cummings don't seem to like each other very much. Many Democrats have criticized the hearings as a ploy designed to damage Clinton politically, but it hasn't even succeeded in accomplishing that disingenuous goal, and may actually backfire on Republicans. With that said, Clinton did succeed in highlighting something everyone should take away from the Benghazi hearing.

At around five hours (!) into Clinton's testimony, Cummings returned to the issue of the security officers who attempted to protect Americans at the Benghazi compound on the night of the attack, a subject that had been touched upon earlier. When asked to elaborate on the topic, Clinton seemed emotional while bringing attention to an aspect of the attacks that deserves far more recognition than it's received so far — namely, that the Americans who died in the Benghazi attacks and those who risked their lives to help them were undertaking incredible acts of heroism and courage when they lost their lives, and ought to be treated as heroes. She said:

You know, I don't want anything that is said to me or about me to take away from the heroic efforts that the diplomatic security officers exhibited. The five men who were with [US Ambassador] Chris [Stevens] and [Foreign Service officer] Sean Smith risked their lives repeatedly and were themselves under grave threat.

"The lead diplomatic security officer who was with both the ambassador and Sean Smith endeavored to lead them to safety through a wall of black smoke," Clinton continued. "He, himself, nearly died of smoke inhalation. When he looked around to make sure that both Sean and Chris were with him, he couldn't find them. Rather than proceeding and saving himself, which would be a natural human instinct, he turned back into that black diesel smoke desperately trying to find Chris and Sean."

Yes, the level of security at the compound in Benghazi was inadequate on the night of the attacks, and yes, the results of this were tragic. Those are facts. And yet neither of them negate another equally important fact that too often gets lost in the conversation: The diplomatic security officers themselves were brave and deserve the utmost respect and admiration. They displayed courage and heroism that night, regardless of the outcome.

Clinton made sure that this point wasn't lost on either the committee members or the general public at large. Pointing out that "this was the fog of war," Clinton reminded everyone listening that the people who died that night weren't just four Americans; they were four American heroes.

"Looking at all of the information, the Accountability Review Board and, particularly, Admiral Mullen — who was focused on what happened, what the security personnel did that night — came out agreeing that they were heroic and they did all they could do to try to save their colleagues' lives."