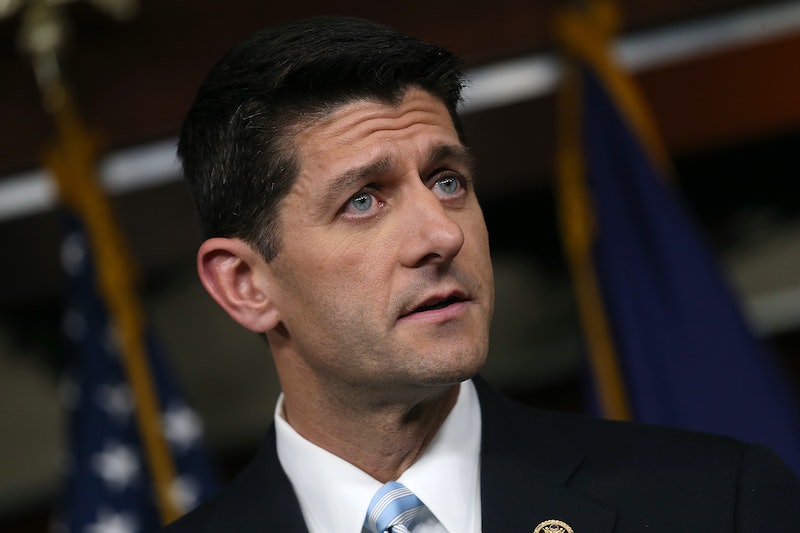 It looks like House Republicans’ chaotic scramble for a new leader is nearing an end. After much cajoling and arm-twisting, Paul Ryan will run for speaker of the house. It’s a remarkable turnaround for the former vice presidential candidate, who has made his complete lack of interest in the speakership explicitly clear on numerous occasions. The GOP establishment essentially begged him to run, though, and he has decided to answer their calls. But one question remains open: Who else is running for speaker?

In short, we don’t really know yet, and won’t know until the vote for the position takes place. On Wednesday, conservative favorite Daniel Webster said that he would continue his campaign for the speakership, but that was before Ryan officially jumped in. As of now, Webster is Ryan’s only competition — assuming that Waka Flocka Flame’s run fizzles out. Jason Chaffetz, the only other candidate who had previously declared a bid, has now dropped out and endorsed Ryan.

When Kevin McCarthy was running for speaker, neither Chaffetz nor Webster stood a real chance of winning. Their candidacies were like third-party bids for the presidency: mainly symbolic. When McCarthy abruptly dropped out of the race earlier this month, they stuck around in the hope that maybe they could fill the vacuum.

But Ryan’s candidacy changed all of this. It became clear soon after McCarthy’s withdrawal that Ryan was, in all likelihood, the only Republican in the entire House of Representatives who could get enough internal support to win the speakership. If Ryan didn’t run — which he initially didn’t want to do — Republicans would likely have had to form a coalition speakership with Democrats, which would be a first in U.S. history, and most definitely not a desirable outcome for the GOP.

This placed extraordinary pressure on Ryan to run. Chaffetz’s decision to withdraw from the race was part of that pressure. He dropped out and threw his support behind Ryan because he knew that Ryan, and not himself, was popular enough to win the speaker’s election with broad support and unite the party.

Now that Ryan is officially running for speaker, the question is this: Will Webster follow Chaffetz’s lead and drop out of the race? If so, Ryan will be run unopposed, barring any last-minute developments. If Webster stays in, he’ll likely be no more than a thorn in Ryan’s side. The conservative House Freedom Caucus, which had previously endorsed Webster, has now thrown the majority of its support behind Ryan.

One last note: Technically, there is another candidate running for Speaker. That would be House Minority Leader Nancy Pelosi, noted Democrat. However, her campaign is basically a formality: In House speakership elections, the leader of the minority party always mounts a bid. They always lose — since the majority of the House votes for the majority party's candidate — and assume the post of Minority Leader instead.