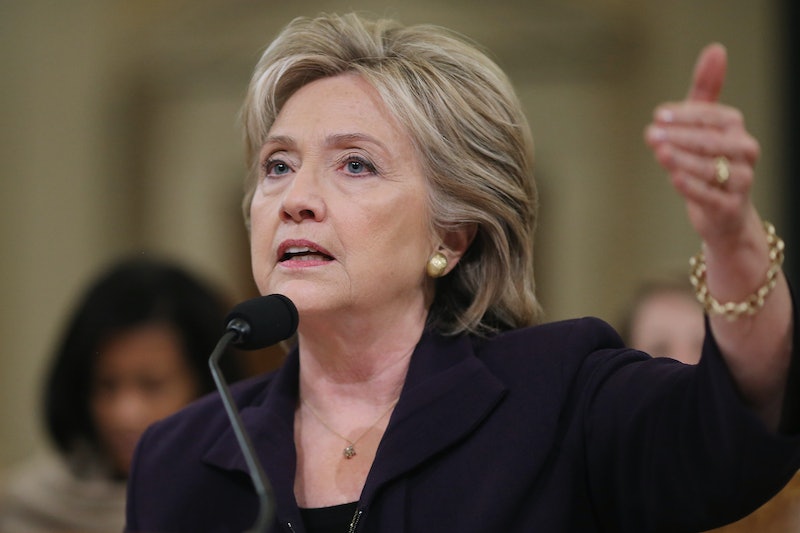 It all got hashed out Thursday. After months of debate over whether yet another hearing concerning the 2012 attack on the American diplomatic compound in Benghazi was merely a GOP attempt to damage former Secretary of State Hillary Clinton's reputation, the Congressional Committee asked their questions and Clinton gave her testimony. And asked, and gave. And asked, and gave. How long, exactly, did Clinton's testimony on Benghazi last? Let's just say it went into double digits — and that's hours, in case you weren't sure.

Eleven hours doesn't sound that bad if, say, that time is being divided among several people providing testimony. Thursday's hearing, however, (and pretty much all days since the night of the attack) was all about Hillary. Clinton was the only one providing testimony for the duration of the hearing, and so who could blame her for having a coughing fit at one point towards the end of the hearing? Give a former secretary a break.

The committee did call for several breaks over the course of the day, actually. The room emptied in the afternoon for a lunch break, while at another point, a recess took place so members of Congress could take part in a Congressional vote.

But being the target of intense grilling on way more than just details of what happened the night of the attack (like what kind of responsibility Clinton was willing to take for the deaths of the four Americans killed during the attack and, of course, the emails) is no simple task, even with a few minutes to take a breather and have a sandwich.

To add a bit of context, Clinton's testimony on Thursday lasted longer than all the previous hearings combined, Reuters reports. So despite all the times Republican Chairman of the Committee Trey Gowdy defended his party in saying the investigation was not a "witch hunt" for Clinton, it's hard to deny the hearing seemed like an effort to wear the former secretary down.

But what's more of note than how ridiculously long the hearing lasted is that Clinton managed to come out of it not just alive, but kickin'. When Gowdy and the other committee members asked the tough questions about the 2012 attack, Clinton provided answers. When they asked questions that veered into unrelated territory, she reminded the committee what the hearing was really about: the deaths of four Americans and determining ways to prevent attacks like this one from ever happening again.

Brush that shoulder off, HRC.