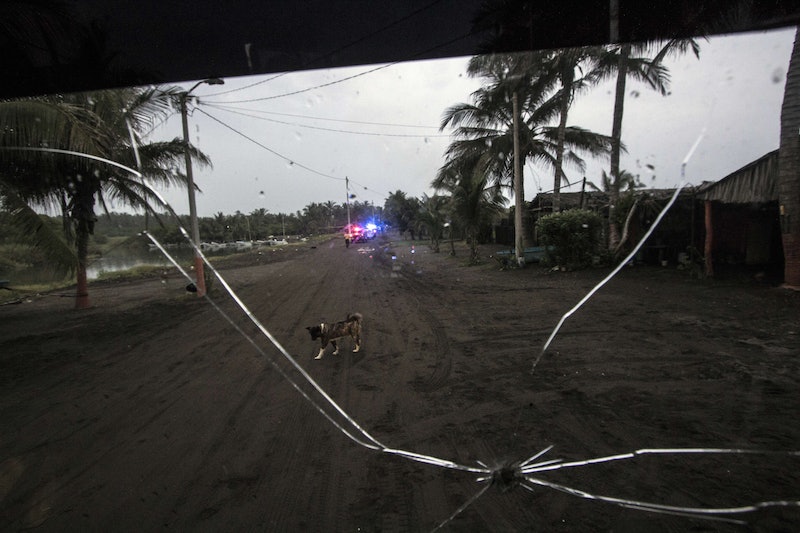 Early on Friday morning weather officials announced that Hurricane Patricia, a storm currently moving towards the Pacific coast of Mexico, is now the largest hurricane ever to be recorded. Citing winds of 200 miles per hour, officials have warned that the hurricane could create waves of 40 feet and "life threatening" flash flooding off the coast of Mexico, according to NBC. The record breaking storm has triggered warnings to residents of Mexico to prepare for "the worst case scenario." The storm is currently on a deadly pace and may hit Mexico, where a state of emergency has been declared. Currently the most massive storm ever to be observed with satellite tools, Hurricane Patricia is expected to hit Mexico as early as Friday afternoon.

While hurricanes are necessarily unwieldy and difficult to predict, experts are confident that this storm very likely will cause intense rains, flash floods, deadly rip currents, and enormous waves along Mexico's coast between Puerto Vallarta and Manzanillo. Hurricane Patricia is currently a Category 5 hurricane and is expected to remain at that intensity until it hits landfall later on Friday. CNN reported that the results of Hurricane Patricia are likely to be catastrophic and extremely dangerous for affected areas.

Gawker has reported that Hurricane Patricia's strength and wind speeds are about as intense as is possible on the planet, and stated further that there is still some possibility that the storm could further intensify as it moves closer to the coast of Mexico.

While the worst damage is predicted to be sustained by Mexico, there are also dangerous implications for Texas as well. NBC reported that parts of Texas were already predicted to receive 10 inches of rain throughout the course of the weekend and could possibly receive additional rain as a result of Hurricane Patricia.

As the largest storm on record, Hurricane Patricia is unlike any storm the planet has seen in the modern era, but experts have been referencing a couple of other storms as a means of comparison.

NBC stated that the only other Category 5 hurricane to ever hit anywhere throughout the Pacific coast since record-keeping for hurricanes began in 1949 was an unnamed storm in October of 1959. That storm struck near Manzanillo and resulted in the deaths of approximately 1,800 people, 800 of which were caused by mudslides.

The previous hurricane wind speed record was held by Hurricane Allen. The 1980 storm was positioned in the Atlantic Ocean and sustained wind speeds of 190 miles per hour. The National Oceanic and Atmospheric Administration (NOAA) records show that Hurricane Allen weakened to a Category 3 before ultimately making landfall in Port Mansfield, Texas.

The damage Mexico will sustain in the wake of Hurricane Patricia is yet to be seen, but current warnings indicate that Patricia could likely be extremely damaging.