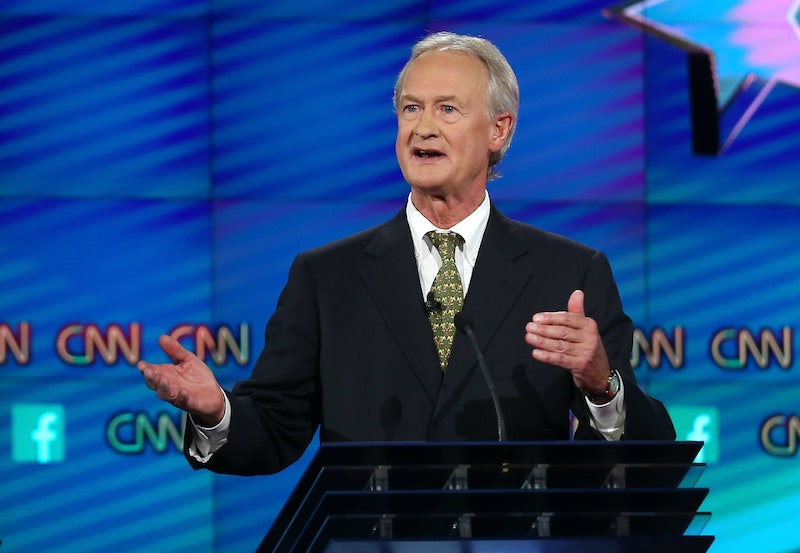 On Friday morning, Lincoln Chafee announced that he was ending his campaign for the Democratic presidential nomination. The metric system-loving former Governor of Rhode Island had a long-shot campaign to begin with, and his decision to call it quits early is probably a prudent one. During his speech, Chafee seemed pretty cheery given that he was terminating a presidential campaign, and stated his commitment to his platform of "Prosperity through peace." Though Chafee has been able to keep a smile on his face throughout his campaign, despite intense ridicule from much of the press (looking at you, Wolf Blitzer), now that his campaign is over, I hope everyone can stop making fun of Lincoln Chafee. Honestly, Chafee's a good person who just happens to really love the metric system (and peace!).

Chafee has been the target of jokes since, literally, day one of his campaign, when he dedicated much of his campaign announcement to his plans to switch the U.S. over to the metric system. This plan, which is a good one but was in fact a bit odd to run a presidential campaign on, opened the floodgates of scrutiny, and everyone has been picking on the guy ever since.

Just this week, CNN's Wolf Blitzer brutally laid in to Chafee on live television over Chafee's extremely low ranking in the polls (Chafee was consistently polling at 0 percent in polls). Blitzer all but told Chafee that nobody on earth likes him at all, and Chafee kept a smile on his face and graciously responded to Blitzer's questions. It was really like watching the nicest kid in your school get screamed at in front of the whole cafeteria for no particularly good reason.

Now that Chafee has taken himself out of the running for president, I hope we can all lay off him a bit. Sure, he's a goofy person who doesn't have the grit or savvy for a presidential campaign but, sheesh, can we blame the man for trying? It's not like Chafee wanted to drag us into a war (never forget he voted against the invasion of Iraq), took low blows at his fellow candidates, or even said anything remotely antagonistic during his campaign. Because he seems to be a bit kooky, he's been absolutely lambasted by the public and press. Poor guy.

Seriously, Chafee didn't do anything during his campaign to merit lambasting of this intensity. He just doesn't have a lot of popular appeal and says goofy stuff — like comparing himself to a block of granite. He's different, no doubt, but nobody can accuse him of having been a bad guy during his run for the Democratic nomination. So, now that he's conceded that he can't make it to the primaries, let's cool it with the granite tweets, the metric system bashing, and the general picking upon of probably the nicest person to have been in the 2016 race. If we're going to rip into politicians let's at least focus on the ones who are overtly racist, sexist, and overall kinda dumb (ahem, Trump).

Presidential campaigns need strange people like Chafee, even though there's no earthly chance they could beat the front-runners. They bring less-heard perspectives to the fore, and bring additional voices to debates, which challenges the front-runners and helps the public learn more about the more likely nominees. Chafee's dedication to peaceful tactics is admirable and not something we've heard much of from other candidates. I think politicians like Chafee don't necessarily run to win, they run to give their ideas a larger platform, which is what Chafee did. So I say good for him, and now let's leave him alone.