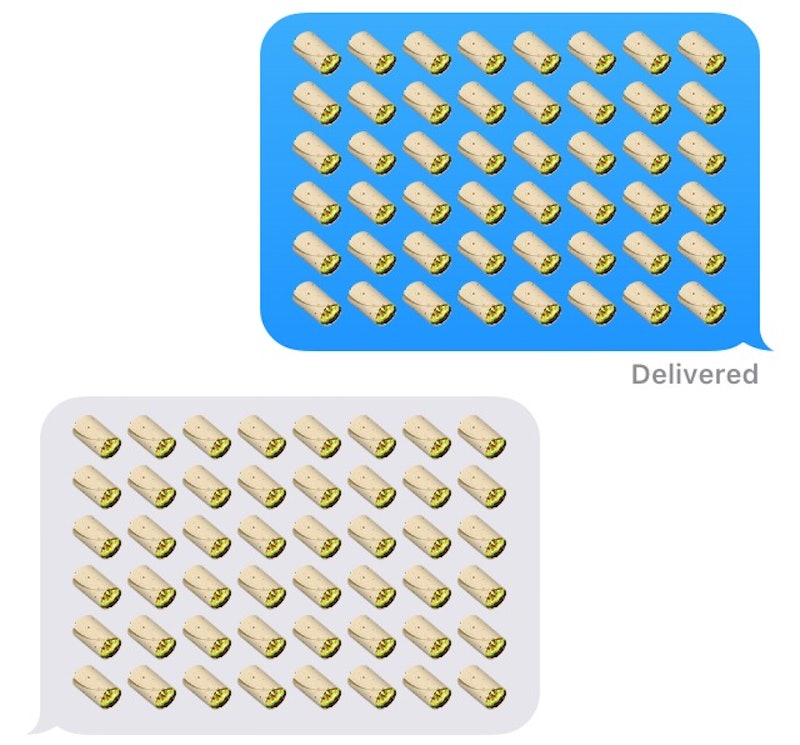 On Wednesday this week, dreams became a reality when over 150 new emoji were introduced alongside Apple's latest software update, iOS 9.1. Among the many new pixelated pals was a taco, a wedge of cheese, and — most importantly — a beautiful, beautiful burrito emoji. Although the taco emoji may have had a more fervent following, the burrito is no less deserving of our love and affection; as such, I would like to invite you all now to join me in singing the praises of this magnificent creation.

The burrito is just one of many emoji for which we've had our fingers crossed for years. Given the fact that emoji are Japanese in origin, it's perhaps unsurprising that the majority of the food emoji available up until now have largely been Japanese fare. But back in July, it was announced that our culinary prayers would be answered, and a burrito would be among numerous additions to the emoji family.

Finally, after months of waiting, agonizing, and writing longing poetry in my diary, the burrito emoji is live. Just thinking of the potential the human race now has with this new technology is filling me with unbridled joy. Imagine the possibilities: Telling your friends what you want for lunch; describing how you feel in January when you have three sweaters on at once; I would even bet that by this time next year, we'l be able to order Chipotle simply by texting a burrito to the appropriate number.

Naturally, the circle of social critics known as the denizens of Twitter voiced their thoughts on this groundbreaking issue as soon as news of it broke. Some were thrilled (naturally), some were aroused (?), and some were just downright displeased (!).

Yes, this is most certainly not a drill. We are now living in a Utopian age. It's also worth noting that all of your texts exchanges are now going to look like the picture on the right.

"The foil is off the tortilla" is my new favorite expression.

One can only hope there will be some sort of ghost-themed movie using this Tweet as its concept somewhere in our near future.

Some people were slightly less thrilled about the specifics of the burrito emoji. They must have pretty sharp eyes, though, if they can distinguish a two-pixel potato.

This person definitely has the right idea. Emoji tattoos definitely aren't a new concept, so this is simply a natural progression.

I doubt I am alone when I say that I consider burritos to be one of the top five foods in existence — and the fact that we can now literally communicate using a burrito brings tears of joy to my eyes. Now, go forth, download iOS 9.1, and take your burrito game to entirely new heights.