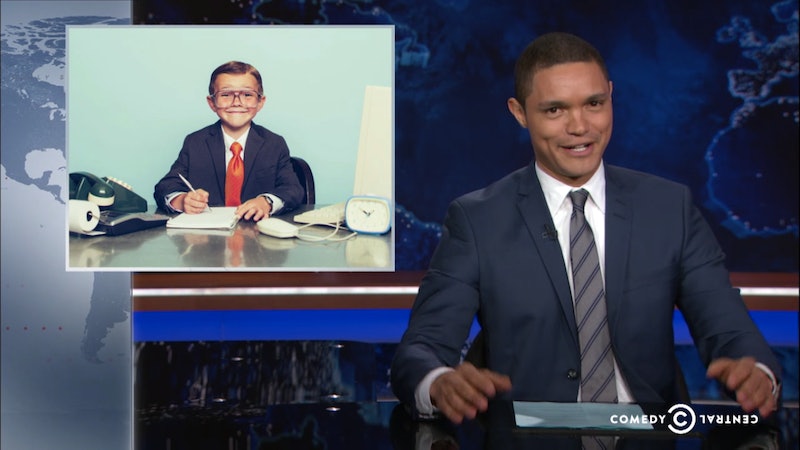 With the premiere of CBS' Supergirl nearly upon us, there's at least one person who's clearly looking forward to it — rapidly wilting Republican presidential candidate Jeb Bush. During an appearance at the LIBRE Initiative this week, the once-establishment darling answered a question about his favorite superheroes by lauding Melissa Benoist, the star of Supergirl, as "pretty hot," a remark that's stirred up a fair bit of confused controversy, much of it amounting to "really, Jeb?" And on Thursday night, Trevor Noah followed suit — The Daily Show hit Jeb Bush for "creeping" on Supergirl, and let's just say this isn't the kind of coverage that breathes life into a dying campaign.

Things aren't looking very rosy for Jeb — not now, nor have they for a while. It's increasingly looking like his presidential ambitions will effectively have been thwarted by real estate magnate and embattled front-runner Donald Trump. He's reportedly been forced to cut staff payroll by 40 percent, which is never a great sign, and more to the point, he's polling at just seven percent, stuck in the morass of a still-massive Republican field.

In a certain sense, it was important for him to get some attention, at almost any cost. That said, Noah was clearly tickled pink by the peculiar "tell them all I'm hot for Supergirl" strategy.

Noah introduced the segment by dubbing this the "age of superheroes," a filmmaking landscape littered with countless remakes, relaunches, and re-imaginings of classic comic book tales. Noah also referred to the favorite superhero — "Captain Africa," which is to say, Nelson Mandela — whose powers Noah listed as "hope, forgiveness, and laser vision."

Then came the fateful footage of Bush speaking at LIBRE, challenged to say who his favorite superhero was. At first, he seemed a little chafed by the question, saying, "This is the second time I've been asked this question, what's up with this?" He then observed that "I like watching the movies, and I wish I owned Marvel." To which Noah replied: "Not flying, not shooting lightning. Most people have an inner child; Jeb Bush has an inner accountant."

Then came the moment in question: Bush commented that he'd seen an ad for Supergirl while working out in the morning, and he was apparently a little charmed by Benoist.

I saw that there's, uh, Supergirl is on TV, I saw it when I was working out this morning, there was an ad promoting Supergirl, she looked pretty hot.

Noah described this, quite aptly, as "creepin' on the Kryptonian," and warned everyone to give Jeb some space after the show premieres on Monday night: "Supergirl premieres next week at 8:30 on CBS, and based on Jeb's excitement, I suggest no one shake his hand after 9:00 p.m."

The attention generated by this story sort of speaks to the dilemma Jeb faces. On the one hand, he's been running all along as a serious-minded, if slightly uncharismatic, establishment choice. On the other, he's seemingly faltered at points by virtue of how staid and buttoned-up he looks in contrast to Trump, who's emerged as his chiefest political foil.

Basically, there's no way for him to court this kind of coverage unless he pushes his boundaries a little, but even if he does, he can never hope to match Trump's litany of outrageous comments. He's caught in the middle, criticized by liberals and roasted on The Daily Show, while gaining no noticeable appeal to conservatives in return. And at this point, it may already be an unfixable problem.