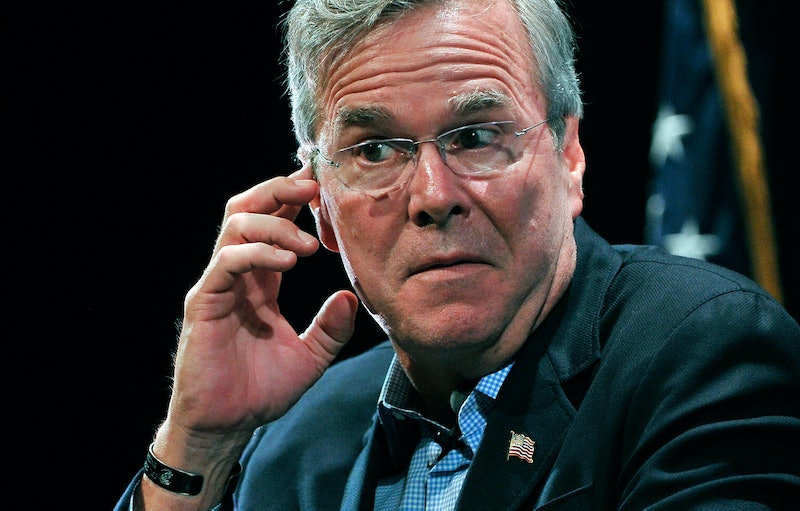 The third GOP debate is coming up on Wednesday. That evening, the Republican presidential candidates will assemble in Boulder, Colorado to have it out over the issues once again. Two Democrats dropped out of the race this week, and following the next GOP debate, I think we can expect to see some additional Republicans calling it quits as well. One candidate who has some really hard decisions to make after this debate will be Jeb Bush, whose decline in the polls has only grown greater over the last couple of months. Originally considered a shoo-in for the Republican nomination, Bush has now fallen behind Donald Trump and Ben Carson in the latest Iowa poll. Given his current polling situation, Bush has the most to lose in the next debate if he once again fails to appeal to more voters.

While everyone apart from Trump and Carson are doing pretty poorly in the polls at this stage, Bush is far and away, or rather was far and away, the most likely "serious" candidate to take the lead away from Trump, who has no experience in politics. Bush has been watching the nomination slip out from between his hands, essentially because an entertainer and a businessman decided to make a run for it. The latest poll out of Iowa show Bush at the very bottom of the first-tier candidates, with only 5 percent of Republican voters indicating they would vote for Bush (Carly Fiorina is the only other top-tier candidate with a 5 percent ranking).

Not only is Bush lagging woefully behind in voter support, it emerged on Wednesday that Bush has slashed his campaign budget. CNN reported that the Bush campaign has cut staff, lowered salaries, and trimmed the travel budget so that Bush can focus resources and time in early voting states. National Journal published an opinion piece on Friday that stated just how serious of a shake-up this is for Bush's campaign, as it indicates a high level of panic on Bush's part. Donors were already nervous once Bush's ratings took a nosedive, and the latest poll showing Bush at the bottom clearly only made matters worse.

Now literally in last place among the top candidates, Bush needs to pull out something spectacular if he's going to take down not only Trump and Carson, but also Marco Rubio, Ted Cruz, and Rand Paul, candidates he held a significant lead over at the start of the election season. Of course Bush can criticize his fellow contenders in interviews and speeches, but the best chance he has to show that he would be a better president is if he dominates in the debates.

With the already low ratings and the news of his downsized campaign staff and budget, Bush doesn't exactly look like a strong contender. But strong debate performances have done wonders for other's campaigns in the past (CNN changed their debate rules so that Carly Fiorina could participate during their primetime debate after her stand out performance during the first GOP forum), so a stellar debate night for Bush could end up making a world of difference. But a weak debate performance? Well, that could have an equal opposite reaction.

None of the other candidates have lost the sort of lead that Bush once held, nor were any of them considered especially likely to clinch the nomination. If other candidates don't do well in the debate, it might mean their already unlikely campaigns end sooner than they would like. But if Bush can't prove himself, he loses what was once a very real shot at the presidency.