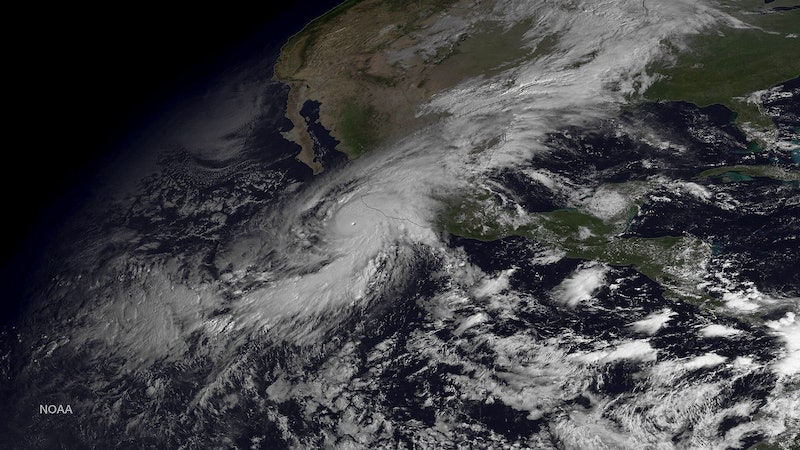 Never has Scott Kelly been more grateful to be well out of the way than on Friday, when Kelly tweeted a photo of Hurricane Patricia from his viewpoint at the International Space Station. Kelly, of course, is spending an entire year up in the ISS, and this month broke the record for the number of days an American astronaut has spent in space. This does not scare Kelly. Patricia, however, does. "Hurricane #Patricia looks menacing from @space_station. Stay safe below, #Mexico. #YearInSpace," Kelly tweeted on Friday morning.

Kelly has reason to be afraid. Patricia is quite literally the strongest hurricane ever on record and is barreling toward Mexico as we speak. The World Meteorological Organization has tweeted that Patricia is on track to be as bad, if not worse, than Typhoon Haiyan, which killed 6,000 people back in 2013. Scott Kelly's photo paints it as a giant gray cloud enveloping the surface of the globe, covering Kelly's view of, you know, actual countries.

Patricia is anticipated to hit Mexico late on Friday. The country is frantically preparing for Patricia, which has set up more than 1,700 shelters and has issued numerous emergency warnings, pleading with residents of the states most likely to be affected — Jalisco, Colima, Nayarit, Michoacan, and Guerrero — to take precautions to protect themselves.