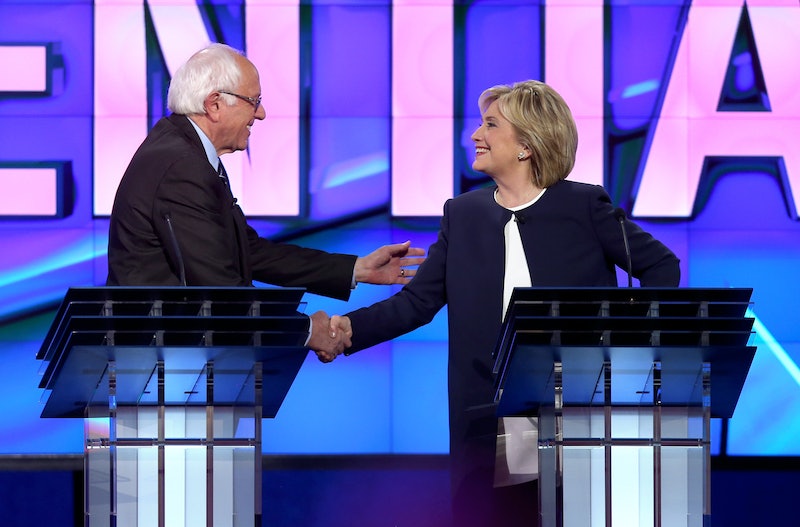 Financial news network CNBC is hosting the third Republican presidential debate on Wednesday, Oct. 28, and while it'll probably be less of a circus than the last two conservative showdowns, we're sure some ill-advised hijinks will ensue. After all, former Arkansas Gov. Mike Huckabee is still in the race, and if you followed Huckabee's Twitter timeline recently, you'd know those racist jokes are basically just his warm-up for prime time. Maybe the Republican candidates — all 10 of them appearing in Wednesday's debate — could learn a little bit about decorum and diplomacy from the incredibly civil Democratic debate, which showed how presidential debates should be. What can the Republican presidential candidates, including front-runner Donald Trump, learn from the former five Democratic candidates (Lincoln Chafee and Jim Webb have since dropped out of the race). Oh, just that it doesn't hurt to be stately, factual and, above all, kind — especially to each other. Are you hearing this, Trump?Here's some constructive lessons from the Democrats that the Republican candidates should consider before Wednesday's debate...

Be A Statesman (Or Stateswoman)

One of the most talked about moments from the Democratic presidential debate was Sen. Bernie Sanders' defense of Hillary Clinton. As we all know by now, both conservatives and the media have been using Clinton's email scandal as fodder to foil her campaign. It's not necessarily working, but as the polls have shown, Clinton's trustworthiness dipped considerably over the summer as investigations over her private email server and classified documents continued.

But during the first Democratic debate, Sanders — Clinton's biggest rival — took some of his own precious speaking time to defend Clinton. "The American people are sick and tired of hearing about your damn emails," Sanders said. He added that "the Secretary is right" — the people want to talk about the biggest issues facing them.

The two candidates then shook hands in an unusual show of solidarity. It was a truly presidential moment for both candidates.

Don't want to answer a question? Or are you secretly judging your fellow candidates' various platform positions but don't feel like ranting about it? Take this classy move from the Clinton Playbook.

Republican-turned-Democrat-turned-possibly independent Jim Webb didn't have a very good showing at the first Democratic debate, which he no doubt blamed on the lack of time given to each candidate. OK, these debate formats may not be ideal, but did Webb need to go off on CNN's Anderson Cooper almost every time the camera turned to his podium? When Webb did speak, he liked to remind us how terrible the debate format was, which, judging by his recent drop out of the Democratic presidential race, wasn't a good look for the former secretary of defense.

Here's some of Webb's best lines from the debate, and none of them are about policy:

Be Prepared To Be Questioned

When Donald Trump was pressed about his past sexist statements by Fox News' anchor Megyn Kelly, Trump turned it into yet another sexist attack on a powerful woman. He later notoriously doubled down on his onstage remarks, saying post-debate that Kelly had "blood coming out of her wherever."

Cooper also tried to hardball the Democratic candidates, whether Clinton and her emails, Sanders and his socialism, or former Maryland Gov. Martin O'Malley and his track record as the mayor of Baltimore/The Wire persona. "[Baltimore] exploded in riots and violence in April," Cooper asked O'Malley. "The current top prosecutor in Baltimore, also a Democrat, blames your zero-tolerance policies for sowing the seeds of unrest. Why should they elect you?"

Ouch. The candidates, though, didn't cave, nor did they just shout strange non-sequiturs like "Benghazi" or "Reagan" in response. Sure, O'Malley may not have been able to totally defend his track record, while Sanders came under for voting for the war in Iraq (along with Clinton), but they did remain calm and balanced in their responses.