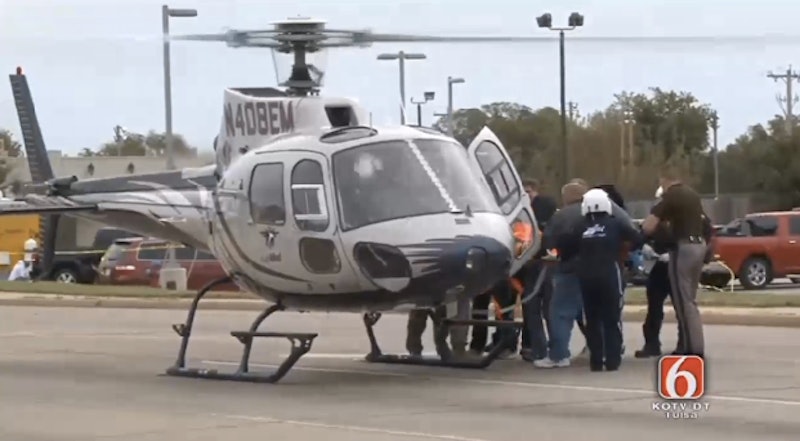 At least three people are dead and nearly two dozen more were injured after a car crashed into an Oklahoma State University homecoming parade Saturday morning in Stillwater, Oklahoma. Stillwater Mayor Gina Noble confirmed at a press conference that 27 people were injured after the vehicle plowed through the parade at a high speed. Local news outlets reported that children were involved in the incident, and may be among the wounded.

According to News 6, eight helicopters arrived at the scene to airlift the wounded to local hospitals. Noble confirmed that several people are in critical condition.

News 9 reporter Evan Anderson reported via Twitter on Saturday that the suspect in custody is a 25-year-old woman who was allegedly drunk when she drove her vehicle through the busy parade. Oklahoma City NBC affiliate KFOR also confirmed the arrest, identifying the woman as Adacia Chambers. KFOR reported that she has been arrested for driving under the influence.

Chambers and her vehicle were reportedly not part of the homecoming parade. It remains unknown at this time why or how Chambers' vehicle plowed through the large crowd of onlookers. Her vehicle also struck a police motorcycle.

Photos on social media reveal a chaotic and gruesome scene, with debris strewn about as first responders tend to the victims. Some photos also captured Chambers' heavily damaged car.

Oklahoma State University is saddened by the tragic parade incident earlier this morning. Our thoughts & prayers are with those affected.

According to the university, homecoming activities, including Saturday's football game against the University of Kansas Jayhawks, will continue as scheduled.