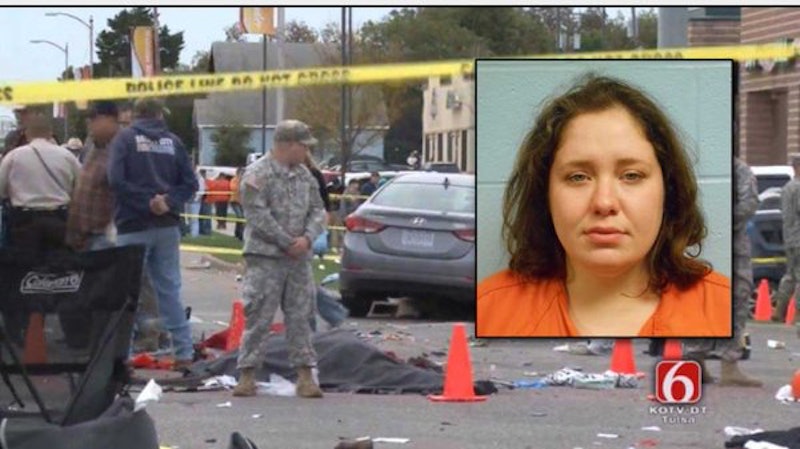 Festivities quickly turned into chaos in Stillwater, Oklahoma on Saturday morning, when a vehicle ran into a crowded street corner during a homecoming parade, killing 3 people and injuring at least 27. According to multiple reports, police took Adacia Chambers into custody, who was allegedly driving under the influence when the crash occurred.

There is little known about the 25-year-old Chambers, who allegedly was driving the vehicle that crashed into the crowd gathered for the parade on Saturday morning. According to the Stillwater Police Department, Chambers was arrested for an alleged DUI and is police custody. Police told local media that they do not believe Chambers is a student at Oklahoma State University.

Police said that the suspect "was clearly intoxicated" as they took her into custody, but it is unclear if she allegedly drove her 2014 Hyundai Elantra into the crowd intentionally or not. According to NBC News, the police will investigate the incident as a homicide.

A photo has been circulated by onlookers and local media of a woman being arrested at the scene, but the police have not confirmed that Chambers is the woman in the photo. It does, however, resemble Twitter and Facebook accounts of an "Adacia Chambers" from Oologah, Oklahoma. In the photo on the Twitter profile, registered in January 2013, the woman pictured is wearing an Oklahoma State shirt. Multiple local outlets have reported that Chambers is living in Stillwater, where the incident occurred.

Local outlets circulated this mugshot of the alleged driver.

Oklahoma State will continue its homecoming game against Kansas as scheduled. The stadium's flag is at half-staff to honor the victims of the crash.

This is not the first tragedy to hit Oklahoma State sports teams. In 2001, a plane crash heading back from a basketball game in Colorado crashed, killing 10 people and 2 players. In 2011, the women's basketball coach, his assistant, and two boosters were killed on a recruiting trip.

"The families, I know, and these victims will never be able to understand this, nor will we," Hargis told ABC. "But the Cowboy family pulls together, unfortunately we've had to do it before and were going to do it again."