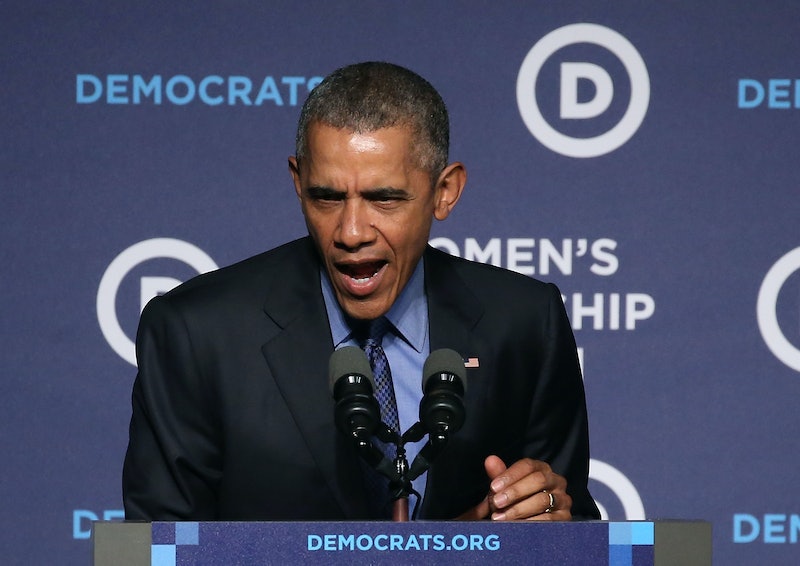 Barack Obama is, without a doubt, our most memetic president ever. That's partially to do with when he became president, obviously — online culture has changed a lot, even in the nearly seven years since he took office. But there's no doubt that has a pretty savvy sense of when dropping an internet meme reference can work in his favor. And it sure did on Saturday: President Obama compared the Republicans to Grumpy Cat during a speech at the Democratic National Committee Women's Leadership Forum, punctuated by a spot-on impression of the notoriously disgruntled feline.

Photos are one thing, but you really have to watch the video to get the full effect — the bemused comparison between an entire political party and a widely recognized, cantankerous cat, the head tilt, the drawn frown. He basically nails the moment, although obviously, your mileage may vary as far as enjoyment goes. If you're an Obama supporter, you'll likely see it as yet another instance of the President showing a casual, humorous side to the public, and if you don't like him, you'll probably see it as frivolous and needless.

And hey, both of those can be true. What's not up for debate, however, is the quality of our commander-in-chief's Grumpy Cat face. That part is indisputable.

... why is it that Republican politicians are so down on America? Have you noticed that? I mean, they are gloomy. They're like Grumpy Cat. ... Everything is terrible, according to them. We're doomed.

Seriously, look at that face. If you'd asked me to imagine Obama making a Grumpy Cat face, I'm not sure the picture in my head could've looked quite so accurate.

Pretty good look, no? This is far from the first time Obama's taken the viral approach to trying to appeal to the public, but throwing an impression on top is another matter — it's maybe most reminiscent of his "not impressed" photo with U.S. Olympic gymnast McKayla Maroney back in 2012. Maroney had made headlines and sparked imitators all over social media with her thoroughly disinterested look after winning a silver medal at the 2012 Summer Olympics in London, and Obama joined her in flashing the signature look when she visited the White House in November.

In fact, it was taken just weeks after he'd won his second term, which made it that much more of a troll-job on his conservative critics. Comparing the Republicans to Grumpy Cat is a far more direct shot across the aisle than a simple scrunched-up face and shoulder shrug is, however — clearly, he's looking forward to a fun final year in Washington.