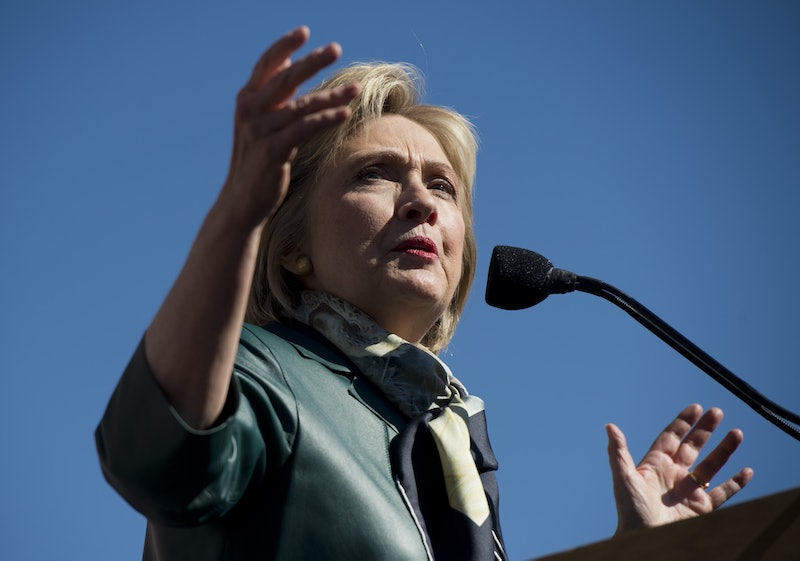 On Friday, MSNBC's Rachel Maddow had the biggest of big political gets: Hillary Clinton's first televised interview since her Benghazi testimony. Just one day removed from the gauntlet 11-hour date with the House Select Benghazi Committee, Clinton expanded on a variety of topics, from policy, to partisanship, to the civil rights achievements of recent years, to what she did right after getting out of the hearing.

All in all, it's an intriguing and informative conversation. Maddow introduced the Clinton appearance (which had been recorded earlier in the day) by disclosing that while she did once shake Clinton's hand and say "Hello, Madam Secretary" at a State Department event, she considered the interview "the first time that I have ever met Secretary Clinton."

She started off, as MSNBC's transcript of the interview shows, by asking Clinton about what it was like facing that 11-hour day on Capitol Hill, facing questions from a decided hostile slate of Republican committee members (though very complimentary ones from the Democrats), and specifically what she did afterwards to unwind. Based on Clinton's experience, it seems like the cure for a long day of testimony is Indian food, a preferred alcohol beverage, and some strictly non-political conversation.

... I had my whole team come over to my house and we sat around eating Indian food and drinking wine and beer. That’s what we did. It was great. ... we were all talking about (inaudible) TV shows. It was great just to have that chance to number one, thank them because they did a terrific job, you know, kind of being there behind me and getting me ready, and then, you know, just talk about what we’re going to do next.

Maddow also asked Clinton about a hugely consequential decision that somebody else made this week — Vice President Joe Biden, who declined to enter the 2016 presidential race on Wednesday, saying that he felt the "window has closed." Maddow asked Clinton whether Biden might have made a better choice than she did, given the incredible undertaking, and Clinton concurred, saying she thought Biden was "liberated" by the decision.

... I am a huge Joe Biden admirer, friend, a former colleague, and I know this was an excruciating decision in a time of just such pain and grief for him and his family. He is liberated and I don’t think history is done with him. There is a lot for him and the President to keep doing in the next year and a half. And I want to build on the progress that they are leaving behind. I feel very strongly about that. I want to go further, but I think the real point of this election is whether or not the Republicans are going to be able to turn the clock back and rip away the progress that has been made. So I, I want to support what the President and the Vice President have accomplished.

Clinton citing a desire to "support" the Obama administration's accomplishments might seem small, but it's actually a question with enormous political implications. It's always a topic of discussion whether presidential contenders for the White House's incumbent party will run with the achievements of the prior administration, or run against them.

And in Biden's Rose Garden speech announcing he wasn't running, he sent a very clear message, straight at Clinton. He argued that the Democrats and the nation "would be making a tragic mistake if we walk away or attempt to undo the Obama legacy." It's easy to view Clinton's comment to Maddow as a more or less direct response to Biden's remark.

Maddow also asked Clinton if President Obama had been naive to expect more cooperation and compromise from the GOP, and while Clinton replied that she'd always want to seek compromise, she did throw out a little barb at one particular Republican lawmaker. When Maddow brought up Rep. Mo Brooks of Alabama, who's said he's ready to impeach Clinton on her first day in office, the former Secretary of State was blunt: "Isn't that pathetic? It's just laughable."

Perhaps the most interesting part for progressive viewers, however, will be Clinton's answer about the civil rights record of the Bill Clinton administration. Maddow was careful to state that she realized Clinton wasn't responsible for her husband's policies, but asked whether she'd take a similar or different approach on civil rights issues, given that two major barriers to gay equality — Don't Ask, Don't Tell, and the Defense of Marriage Act — were signed into law by him.

Clinton's answer speaks to her longtime reputation as a political pragmatist — she came right up to the line of defending the decisions on compromise grounds, calling them "defensive" measures to head-off worse outcomes, like a Constitutional amendment banning same-sex marriage.

On Defense of Marriage, I think what my husband believed – and there was certainly evidence to support it – is that there was enough political momentum to amend the Constitution of the United States of America, and that there had to be some way to stop that. And there wasn’t any rational argument – because I was in on some of those discussions, on both “don’t ask, don’t tell” and on – on DOMA, where both the president, his advisers and occasionally I would – you know, chime in and talk about, “you can’t be serious. You can’t be serious.”

She also touched on the 1994 crime bill that's become such anathema in progressive circles, thanks to groups like Black Lives Matter highlighting the state of mass incarceration, and incidents of sometimes fatal police violence against people of color.

And the same with the crime bill, which was a result of a lot of reaction – particularly from poor communities, communities of color – to the horrific crime rates of the 1980s. And there was just a – a consensus across every community that something had to be done. That went too far. First speech I gave in this campaign was about mass incarceration, and about reform of policing practices. And I think that sometimes, as a leader in a democracy, you are confronted with two bad choices.

The whole thing is most definitely worth watching if you have the time. It's telling what message a candidate wants to send when talking to a group of sympathetic viewers. With MSNBC's long-running reputation as a progressive news outlet, and Maddow their flagship personality, you can be sure that Clinton's treading carefully to appease and solidify her base. It'll be a while before we'll see her answer hostile questions from her primary rivals again — the next Democratic debate isn't until November 6.