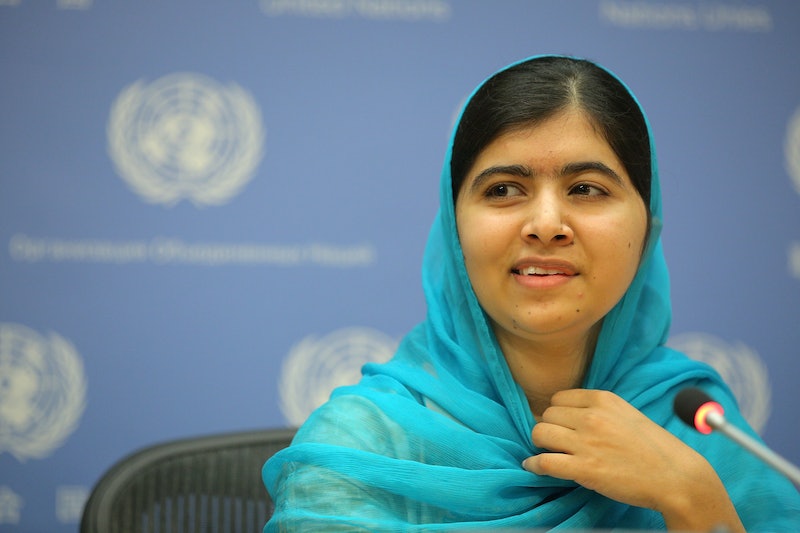 Malala Yousafzai was targeted by Pakistani Taliban gunmen in October 2012 when she was on her way home from school. Yousafzai, who is now 18, has been fighting for years for the rights of girls to get an education, which made her a target for extremist militants, according to the Wall Street Journal. Gunmen stopped her school van about three years ago, asked students to identify her, and then shot her in the head, seriously wounding her. She was flown to a nearby hospital in a coma and managed to live, though the event injured her permanently. She still speaks out about her cause, and refused to give the Taliban power by saying the group's name in a recent interview with Guardian reporter Kate Kellaway. Yousafzai's quotes about the Taliban's attack and her goals show just why she is changing the world.

A documentary about Yousafzai's life, He Named Me Malala, was released in the U.S. last month and was just released in Europe recently. Yousafzai's father, Ziauddin, describes their bond in the documentary as “one soul in two different bodies," according to the Guardian. He told the Guardian that he never encouraged his daughter to speak out — but he also never held her back. As a result, he said he blamed himself for her shooting. He felt like he should've tried to keep her quiet. Speaking about the shooting, her relationship with her father, and her political goals, Yousafzai's five most inspiring quotes make it clear that she doesn't blame anyone and that she's not giving up soon.

Yousafzai was named after the Pashtun folk heroine Malalai of Maiwand, who inspired tribesmen in Afghanistan to defeat the British army in 1880, according to the Guardian. She almost changed her name because her friends said Malalai means "brave" but also "sad." Yousafzai said she didn't change the name, because her father believes in it. "Malalai’s name is about the power of voice," he told the Guardian. But that's one power that Yousafzai won't use when it comes to the Taliban's attack on her:

I never like to discuss it because it reminds me of a bad time. To go forward in life, you have to think of the good things, and things have changed, so why think of the trauma, of the pain?

She said that when she awoke in the hospital, all she could think about was where her family was. She said she could not believe that her father was alive when she first saw him, according to the Guardian:

It was my 10th day in the hospital. I had no idea where I was or where my parents were, and when I saw my father for the first time and realized he was with me ... I cried as loud as I could.

Since then, Yousafzai has published an autobiography, I Am Malala, and won the 2014 Nobel peace prize. She and her father have also cofounded a charity called the Malala Fund, which campaigns on behalf of 60 million unschooled girls around the world, according to the Guardian. She has also criticized President Barack Obama for drone strikes and said the Nigerian president hasn't done enough for the girls abducted by Boko Haram. She told the Guardian that these people, among others, can't really call themselves leaders:

World leaders ignore these issues. They are chosen by people but don’t listen to the voice of people, so how can they call themselves leaders?

Yousafzai said this disconnect between what people need and what politicians do has changed her career goal from being a doctor to being the prime minister of Pakistan. She said people have shot down that dream, and her answer for those people is totally spot on, according to the Guardian:

As our politicians are doing nothing for us, nothing for peace, nothing for education, I want to become prime minister of my country. To some people this seems too much — they feel you can’t dream that way, you must have a smaller dream. But sometimes it’s good to dream bigger. This is what I’ve been telling our world leaders: dream big, make your ambitions bigger.

When the Guardian asked Yousafzai's father if the weight of this dream might be too much for her shoulders, he brilliantly responded "Malala looks small but her shoulders are very strong." Yousafzai and her family can't return to Pakistan, because the Taliban has said that if she does, she will be killed. Yousafzai said she misses her teachers and her friends there, but that she misses her garden the most:

I planted flowers and seeds in it and, right in the middle, a mango tree. ... I’d stand in the garden and look at the stars. Here in the UK I have noticed you don’t really see stars.