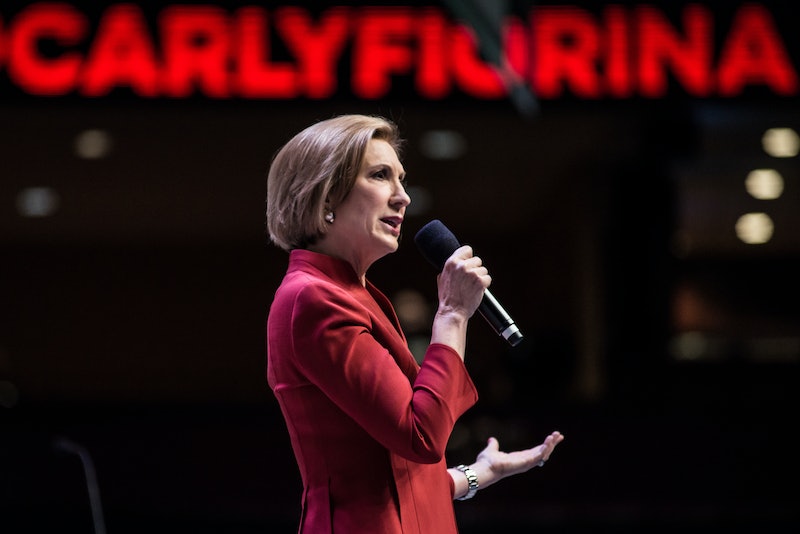 The third GOP debate is set to take place Wednesday, and will include both an opening and closing statement from all candidates. Previous debates have shown presidential hopefuls placing a firm focus on their upbringings, especially when it comes to introducing themselves to the voting public. Though a majority of the candidates, like Chris Christie and Ben Carson, have touched upon where they grew up, not much has been said about the background of the only female candidate on the right-wing side. Where is Carly Fiorina from?

The presidential hopeful was born in Austin, Texas in 1954. Her father, Joseph Tyree Sneed III, was a law professor at the University of Texas, and her mom was an oil painter. Their family moved around a lot, so Fiorina attended five different high schools, and even lived in Ghana at one point. It wasn't until after her father took a position at Stanford to teach law that she graduated high school and entered higher education, receiving a bachelor's degree in philosophy and medieval history from the esteemed institution in 1976. Yet again, academia took her far and wide. She received a masters in marketing at the University of Maryland in 1980, as well as a masters in management from MIT in 1989.

The candidate continued to travel in between receiving both degrees. She describes going from job to job in her autobiography, Tough Choices. She even took on a position teaching English in Italy. A 1998 Fortune cover story describes the former HP CEO as being "impractical and unfocused" and "restless" while in academia, even dropping out of law school before pursuing a more business-oriented degree. She would eventually land at AT&T, ascend their corporate ladder, and go on to helm HP.

Fiorina doesn't speak much about her childhood or her early adulthood. The unconventional nature of moving constantly while a student and businesswoman may have helped her immensely, however. Her life experience appears to be aiding her in reaching voters across key demographics. In a recent Quinnipac University poll of Iowa GOP voters, Fiorina saw her highest numbers with college graduates, as well as those making less than $30,000 per year. Likewise, Fiorina has the fourth-highest favorability rating among GOP candidates. Perhaps pulling out her unique upbringing could work even further in her favor.