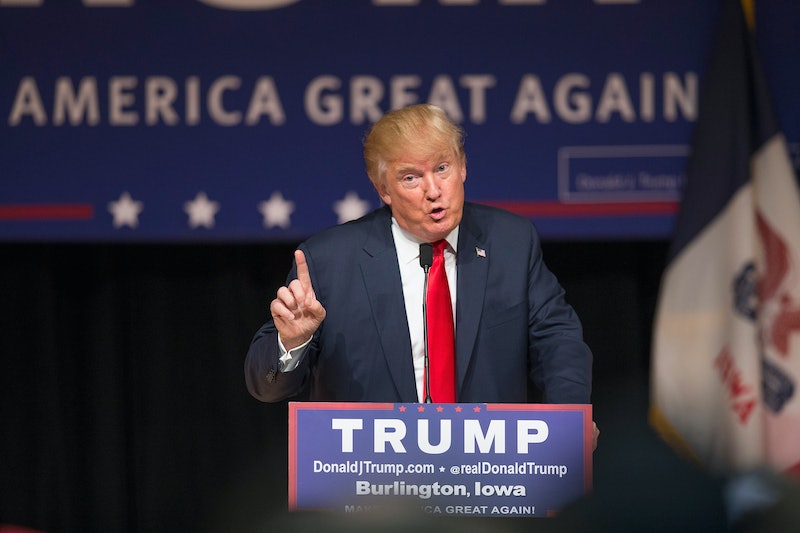 A substandard performance from Donald Trump at the second GOP debate last month means he really has to shine at the upcoming showdown in Boulder, Colorado, this Wednesday. The other kids on the playground ganged up on Trump during the three-hour debate in September, pulling out all the stops to curb Trump's unexpected polling numbers and gain a molecule of media attention. Trump fought CNBC to cut this debate shorter than the last, but while that means he won't have to hold his own against the nine other participants for quite as long, it also means he doesn't get as much airtime to swing potential voters.

Historically, early presidential front runners haven't fared well in primaries or general elections. Fifteen months out from election, preemptive leaders of the pack weren't particularly likely to secure their party's nomination or win the general election. The symptoms of Trump's decline might already be showing up, too. Dr. Ben Carson recently overtook the polls in Iowa, an incredibly important swing state. Of the last Iowa caucuses since 1996, for both Democrats and Republicans, the eventual party nominee only lost the caucus twice. In 2008, Mike Huckabee won in Iowa but went on to lose the nomination to John McCain, and in 2012, Rick Santorum edged out Mitt Romney by a margin of only 34 votes. This recent trend of unpredictable GOP primaries could mean Iowa isn't as solid of a predictor as it once was, but either way, losing the state to Carson isn't a good sign for Trump.

Trump is still polling consistently at 25 percent, but Carson is on his tail with 22 percent, well within the 4.9 percent margin for error. The results could possibly mean that Carson is actually polling higher than Trump nationally, but it definitely means that Trump's solo spotlight is being split more than any candidate would want. While a three-hour debate is undoubtedly taxing on both the brain and the body, Trump maybe shouldn't have been so willing to give up the free airtime with an opponent closing in.

The theme of the next debate, "Your Money, Your Vote" could also be a difficult sell for billionaire Trump. Nobody who has ever worked a minimum wage job wants to be told that $7.25 per hour is enough money, especially by a person who's worth approximately $4 billion. He's also been quiet on taxes so far in this election season, which promises to be a huge topic for on Wednesday. If Trump fails to connect to the financial struggles of the average American, which is 44 percent of Americans' #1 concern, it would be a serious blow to his campaign. His political advisers are going to have their work cut out for them leading up to Wednesday night.

Trump will be hosting Saturday Night Live 10 days after the debate, which will give him another chance to dominate the news cycle for a few days. If he fares well during the debate and has a solid showing on SNL, the media could be talking about little else than The Donald for a long time. With one less competitor than last time on stage at the upcoming debate, Trump might be able to take control back, if his policies are as well-polished as his hair.