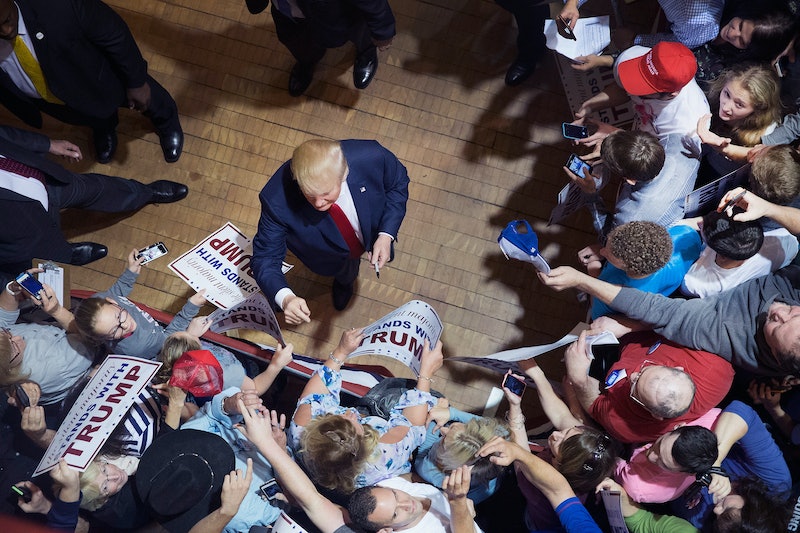 There hasn't been much discussion of Donald Trump's economic policies — the media has mostly been distracted by his various racist, xenophobic and misogynistic comments over the last several months. Another reason there hasn't been a lot of talk about Trump's plans for the economy is because it doesn't really exist. Trump's website only lists three official positions and only the section on tax reform is targeted at the economy. Even that section is a little sparse on actual plans to implement policy change. Ironically, economic policy is an area where Trump should have an advantage over lifetime politicians like Marco Rubio or Jeb Bush — Trump's vast business experience should belie a well-detailed, realistic economic plan for his potential presidency, but so far, it simply hasn't. As much as he talks about his own money, Trump doesn't mention the economy as much as he probably should.

The weaknesses in Trump's proposed economic policies should be great fodder for the rest of the candidates at the upcoming GOP debate on Wednesday. The theme, "Your Money, Your Vote", is centered around the American economy, and because of Trump's persistent ambiguity about economic issues, it could be a great chance for other candidates to derail some of the progress he has made in the polls. Here are several key issues that Donald Trump is rhetorically weak on.

Trump loves to talk about China, but he doesn't have much of a detailed plan to change our trade policies. Trump stated in a 2011 interview with CNNMoney that he thinks the U.S. should put a 25 percent tariff on Chinese goods, which would effectively halt incoming trade from China. It's unclear if anyone has told Trump recently how bad of a plan this is, but in his campaign announcement speech in June, he spoke vaguely about "beat[ing] China" and how he does it all the time in his business ventures. International trade is almost certain to come up at Wednesday's debate and the other candidates should take plenty of time to pick apart Trump's strategy.

Trump's website claims that his tax plan is revenue neutral, but that may not be the case. Experts say Trump's plan will decrease income for the Treasury by $10 trillion over 10 years. Drastic budget cuts would be necessary to avoid increasing the national debt, which Trump has vocally opposed many times. So the question remains, which government programs could be cut to make up for that much revenue? For example, even if the Republicans get their way and manage to defund Planned Parenthood, that's only $528 million per year, which doesn't make a dent in the potentially lost revenue. Even if we dropped our entire defense budget, we would still fall $4 trillion short after 10 years. Trump has to figure out the answers to these questions soon, because they are sure to be asked on Wednesday night.

Trump says the real unemployment rate is as much as 20 percent because "China has our jobs and Mexico has our jobs." Aside from being just completely wrong, bringing manufacturing jobs back to the United States is a solid topic for discussion at the upcoming debate. But instead of just yelling about jobs being outsourced, Trump needs to come up with a plan for incentivizing businesses to rebuild American factories. The problem here is hypocrisy — pictures of products from Trump's clothing line that were made in China have circulated the Internet heavily in the last several months. If the topic comes up on Wednesday, it could be very embarrassing for Trump.

The economy is going to be a primary topic of discussion at the debate on Wednesday, and Trump's vulnerability in this area could be very apparent and very troubling for voters. Trump's occasional, unsupported remarks aren't going to be enough to hold up against two hours and nine opponents in a live debate — if he's going to come out the other side with his lead intact, Trump will need a lot more focus on specific issues and detailed plans than he has thus far.