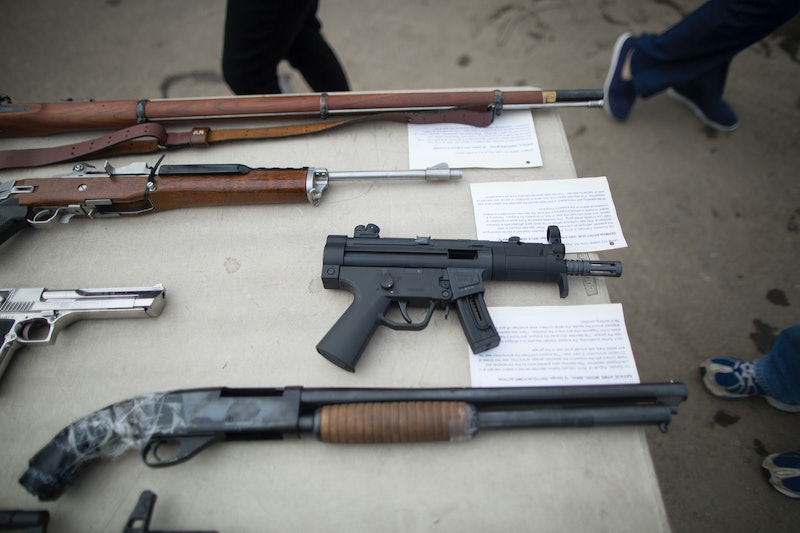 Unfortunately, it's unlikely that the GOP presidential candidates will talk about gun control at their upcoming debate. The theme for Wednesday night, "Your Money, Your Vote," is specifically focused on economic issues, and gun control isn't expected to play a role in the discussion. The GOP candidates have largely avoided talking about gun control in their two previous debates (it was briefly mentioned in the second debate, but only Ted Cruz, Marco Rubio, and Jeb Bush were able to respond to the question). Perhaps the issue is largely ignored because the candidates' answers would be fairly predictable — the candidates all toe the party line about protecting the Second Amendment. But something as important as gun control should not be relegated to the back burner, especially in a year with so much publicity surrounding gun violence.

In January 2013, shortly after the Sandy Hook Elementary School shooting, President Obama announced a bipartisan nine-point plan for preventing gun violence in the U.S. Each GOP candidate should be asked to argue every single point. A growing majority of Americans want stricter gun control laws, and given how much election season depends on polling, the Republicans should be paying attention to those numbers. If a candidate thinks they would a better president, they need to give their opinion on this heavily pressing issue.

And really, gun violence is an both a social and economic issue. Gun violence costs the American economy $229 billion every year in both direct and indirect ways, including wages lost by victims, investigations by police, and incarceration for perpetrators. That's pretty significant, and it means that there's a legitimate reason for gun control to be brought up in a debate about economic issues. But with a shorter debate format and too many issues to discuss already, there's almost no chance that gun control will be on the table Wednesday night.

Jeb Bush's now-infamous commentary on the Umpqua shooting, "stuff happens," is reflective of the GOP attitude toward gun violence and discussion of the topic in this election season. Once again, the Republican Party finds itself at odds with the concerns of the majority of Americans. But it doesn't even seem to care that others are troubled by the state of gun violence in the U.S. The fact that gun control hasn't played a larger role in debates thus far, and likely won't at the debate Wednesday, shows how out of touch Republicans are with issues that affect the American public. Even if the GOP candidates do get around to discussing gun control, their viewpoints aren't likely to include any call for substantial change, which is exactly why the subject needs to be talked about. If the candidates don't see a serious problem that needs a swift resolution, then they're looking at a different country than most Americans.