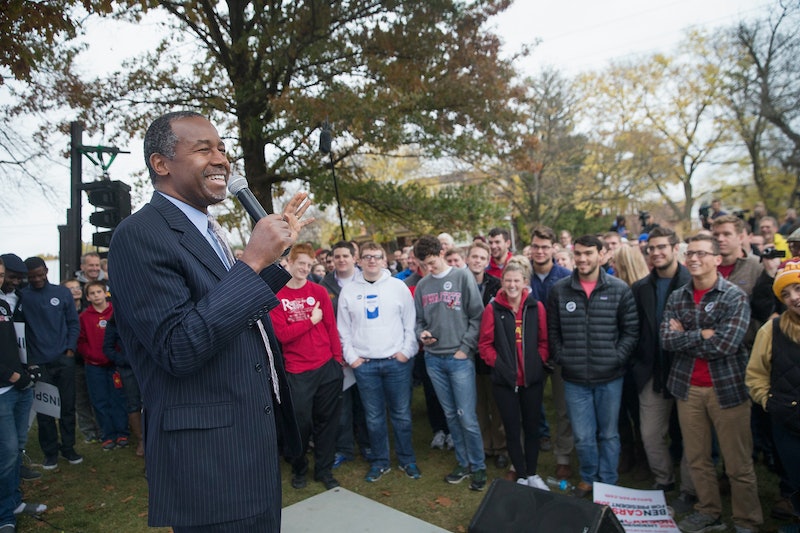 Ben Carson is beginning to make some impressive gains leading up to the third Republican debate. The GOP presidential hopeful has already overtaken perpetual Republican front-runner Donald Trump in a recent Des Moines Register/Bloomberg Politics of Iowa voters, besting Trump by a full nine points. He'll be entering the next debate positioned center stage along with Trump as one of the highest polling candidates out there. Carson's soft-spoken delivery and fiery rhetoric is what has put him on the map, endearing the retired neurosurgeon to so many voters despite having never served in political office. It helps that Carson has an impressive background and foundation to start with, especially when it comes to education. So, where did Ben Carson go to school?

Carson is an Ivy League grad, having attended Yale University on a scholarship. He had always wanted to be a medical professional and set the course towards achieving that dream at Yale, where he graduated with a bachelors degree in psychology in 1973. The school proved pivotal, not only to his professional development but for his personal life. It was at Yale that he met his wife, Candy, also a graduate of the school. Carson has returned multiple times for events and speaking engagements, including delivering the commencement speech for the 2012 class at the Yale School of Medicine.

Carson's next stop in academia took him away from the New Haven, Connecticut, school and back to his home state, where he attended the School of Medicine at the University of Michigan. He decided to specialize in neurosurgery rather than psychology, and received his medical degree in 1977. He then returned to the East Coast for his residency at John Hopkins University. Carson excelled at the Baltimore institution and became chief neurosurgery resident in 1982, and would go on to become the youngest chief of pediatric neurosurgery at age 33. Based on his highly impressive career which included the successful separation of twins conjoined at the head as well as pioneering innovative imaging technology, Carson has received over 50 honorary degrees.

Academics has always held an important role in Carson's life and it's something he has placed a continued focus on. He and his wife head up the Carson Scholars Fund, a nonprofit that provides $1,000 scholarships to deserving students. Additional initiatives include The Ben Carson Reading Project, which aims to provide safe and comfortable spaces for children to embrace reading. For Carson, his background in medicine and higher education has made him an impressive orator and has certainly helped his political aspirations. He'll be playing on these strengths during the third GOP debate, set to take place Wednesday at the Coors Event Center at the University of Colorado in Boulder.