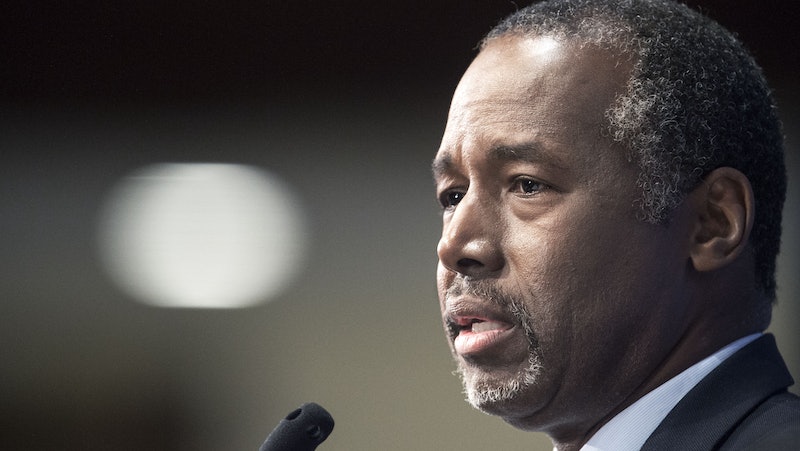 As we all know by now, prior to his decision to enter American politics and campaign for the presidency, Ben Carson was a highly decorated neurosurgeon, famous for separating twins conjoined at the head. Although he earned a degree in psychology from Yale in 1973, Carson enrolled in the School of Medicine at the University of Michigan and chose to become a neurosurgeon. Since then, Carson worked in different hospitals around the world before settling in the United States — where he's now a frontrunner for the Republican presidential nomination.

Raised by a single mother in inner Detroit under great financial strain, Carson was only able to attend Yale through a scholarship and summer odd jobs. In a 1996 interview with the Academy of Achievement, Carson claimed that there was little work available in Detroit, but he persisted and found employment anyway. "If I saw a business establishment, I'd go knock on the door and say, 'I'm a summer student, I need a job.' And I usually got one," he recounted.

After earning his medical degree and meeting and marrying Lacrena "Candy" Rustin, Carson moved to Baltimore and became a resident at Johns Hopkins Hospital in 1977. After five years, he worked his way up to chief resident in neurosurgery.

In 1983, Carson moved to Perth, Australia and began working at Sir Charles Gairdner Hospital. Although he worked as a neurosurgeon there for just one year, the region's severe shortage of doctors trained in neurosurgery enabled him to gain a tremendous amount of experience before he returned to Johns Hopkins in 1984.

By 1985, Carson became director of pediatric neurosurgery at Johns Hopkins. Two years later, he traveled to Germany, where a couple had called upon him to perform surgery on their two seven-month-old twins, who were conjoined at their heads. The surgery, which lasted for 22 hours straight, earned Carson international attention. In the 1990s, he traveled to Africa twice to separate conjoined twins. In 1994, the operation he attempted was unsuccessful, and the South African girls he was working on died due to birth complications.

But in 1997, Carson traveled to Zambia and successfully separated two twin boys through a 28-hour operation. Over the next few years, Carson's powerful life story as a troubled, impoverished boy who worked his way up to become a phenomenally successful neurosurgeon gained as much recognition as his work, and he began working as a motivational speaker. Carson visited and spoke at schools, businesses, and hospitals around the country, and eventually founded the Carson Scholars Fund in 1994, which provides scholarships for young students.

In 2003, Carson traveled once again to perform surgery on conjoined twins. This time, he went to Singapore and the twins in question were adult women, who had spent the past 29 years joined at the head. The operation ultimately resulted in the twins' deaths, as most medical experts predicted.

Between traveling the world, performing high-risk surgeries, and working his way up as a neurosurgeon at Johns Hopkins, Carson has written several books about his life, career, and Christian faith. In October 2013, after earning a reputation as a staunch conservative and vocal critic of President Obama, he was hired as a Fox News contributor. And now, as of his announcement back in May, Carson is interested in working at the Oval Office himself.

Carson has made plenty of cringe-worthy statements on the campaign trail, from gaffes on the debt limit to disturbing remarks that veer on Islamophobic. But there's no doubt that his wide range of travel, experience, and stellar achievements in his field give him bragging rights that his GOP rivals don't have. Carson hasn't been shy about referencing his career at the past GOP debates, and it's more than likely he'll recount an experience or two at the next one.