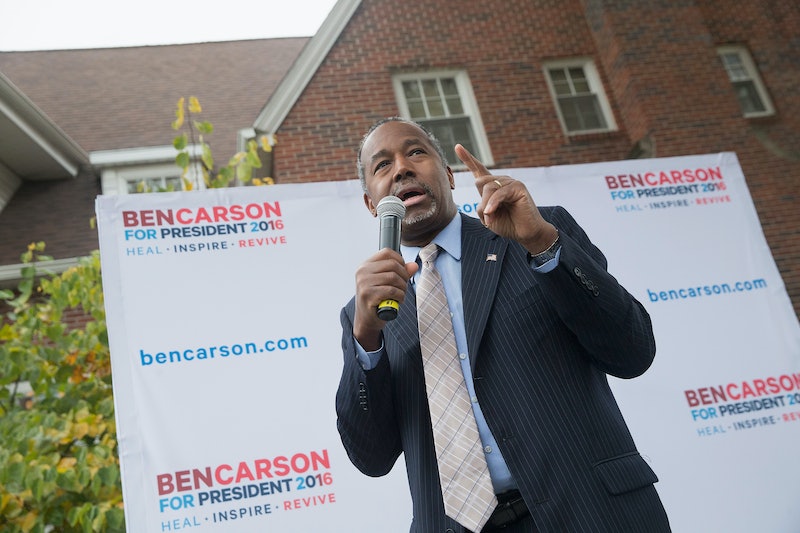 Retired neurosurgeon and 2016 Republican presidential hopeful Ben Carson is steadily rising in poll popularity, making him Donald Trump's biggest competitor in the GOP primary pool. And with 15 people still vying for the Republican primary nomination, that's no small feat. But who is the 64-year-old, other than someone making a bid for the White House? Where did Ben Carson grow up, and where did he live as a child? Turns out Carson was born in Detroit, Michigan, and he first announced that he was running for president in his hometown in May.

You've probably heard some version of the time when a teenage Carson tried to stab his friend in the stomach over a radio, a story he willingly recounted in a March interview with GQ's Jason Zengerle and in his memoir Gifted Hands. But you might not know how and where Carson was raised. For example, Carson was brought up as a Seventh-day Adventist, a faith he still believes in today. If you don't know much about the Christian denomination, you're not alone — Carson's 2016 competitor Trump recently found himself in political hot water for saying he "didn't know about" Carson's faith and the Seventh-day Adventist church. (It should be noted, though, that in 1999, Carson told the Religion News Service that denomination is less important than faith itself, saying that "it's the relationship with God that's most important.")

So how did Carson go from a violence-prone child in Detroit to the "calm manner" (as The New York Times' Trip Gabriel put it) of his 2016 presidential campaign? In his memoir, Carson wrote that when he unsuccessfully tried to stab a friend at age 14, it led to a "change of heart" in his life. "God heard my deep cries of anguish," Carson wrote. Now, Carson has made his reliance on God and his faith an integral part of his presidential campaign, telling Fox News, "I've realized where my success has come from," referring to divine intervention on his behalf.

Carson's background in Detroit wasn't always one of an idealistic Christian family, either. According to The Root, Carson's mother took him and his brother and left his father after discovering Carson's father had another family. But even after all of his family's struggles, Carson went on to attend college at Yale University, where he earned a bachelor's degree in psychology. Carson then attended medical school at the University of Michigan and completed a residency in neurosurgery at Johns Hopkins Hospital.

Though Carson has definitely left his mark on his hometown — Detroit is home to a high school bearing his name — his Republican viewpoints are definitely not the norm there. As Politico notes, Detroit skews heavily liberal and Democratic, so Carson may face more of a challenge than usual to win over voters from his hometown. Still, his story of overcoming previous hardships could resonate with voters of either party, which could also be a contributing factor to Carson's increasing popularity in primary polls.