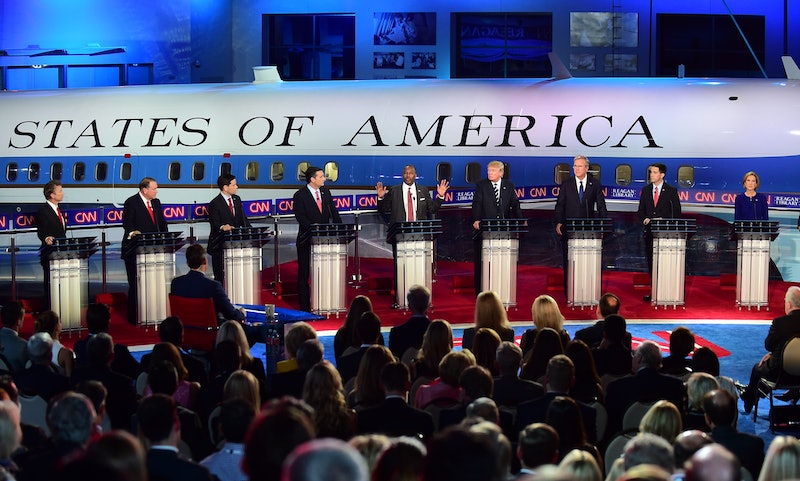 With the third GOP primary debate scheduled for this Wednesday on CNBC, both moderator and participant lineups have been confirmed, and frankly, it's a night that doesn't promise to be too different from the past two debates. The pre-show lineup remains pretty much the same — Rick Santorum, Bobby Jindal, Lindsey Graham, and George Pataki — while, minus Scott Walker, the primetime debate will be virtually the same too: Donald Trump, Ben Carson, Marco Rubio, Carly Fiorina, Mike Huckabee, Chris Christie, Rand Paul, Ted Cruz, John Kasich, and Jeb Bush. (Jim Gilmore did not qualify for either debate.) It's also been confirmed by CNBC's Jake Novak that the third debate will place strong emphasis on the economy, an issue that, for the most part, free-market-worshiping GOP candidates take relatively predictable stances on. So, here's an idea for how to make the third GOP debate more fun: Watch with a conservative friend (if you don't have any of those, a conservative acquaintance or co-worker will suffice).

There's no denying the conflict between conservatives and liberals has become a good deal more polarized in recent years and understandably so, as abortion rights, marriage equality, and other human rights issues aren't exactly easy to compromise on. But at the same time, surrounding yourself exclusively with people who agree with you can get boring. Hearing the other side out might not change your perspective, but it might provide you with a rousing intellectual challenge, and even help you get inside the puzzling way the GOP candidates think.

For example, how did Huckabee manage to compare Kim Davis to Martin Luther King, Jr.? Why are Rubio and Bush so fixated on the term "free stuff?" How did Carson manage to compare abortion rights to slavery? Maybe, just maybe, a conservative buddy can help you to understand. And if that doesn't sell it, here are a few more reasons.

1. Unite To Mock The Donald Together

Sure, you might "agree to disagree" on a lot of issues with your conservative friend/frenemy/nemesis, etc., but if they have the slightest ounce of reason, it's likely they'll be able to agree with you on at least one thing: Donald Trump. Whether his hair or complete inability to contribute anything mature and constructive to the political dialogue, he provides no shortage of material for people of both political parties to make fun of. Who knows, maybe uniting to mock the GOP frontrunner could bring you two that much closer.

2. Stay Awake By Having A Debate Of Your Own

The last debate back in September dragged on for so long that even Bernie Sanders admitted he had to dip out 30 minutes early. So, what better way to stay awake and focused than by making the debate interactive? Inviting a conservative friend essentially guarantees a living room debate of your own, because as the day-to-day stalemate of American politics demonstrates, between conservatives and liberals, there's no shortage whatsoever of topics to argue about.

With this debate slated to focus on the economy, brace yourself to hear the term "free stuff" a lot. Like, a lot. Rubio and Bush aren't the only GOP candidates to ignorantly drop these words, and it's highly unlikely they'll be the only ones to do so on Wednesday night. It's obvious to liberals how repetitive GOP candidates can be when emphasizing their usual arsenal of invalid and offensive points, but less so for their conservative supporters. Address this with a good old-fashioned drinking game that involves taking a shot every time someone on the stage says something commonplace at a GOP debate, like, I don't know, "Hillary Clinton." This might just be the only time you and a friend can get hammered to #getlearnt.

Once again, with the debate focused on the economy, the term "free stuff" and the word "entitlement" are going to come up pretty often. The fact of the matter is that the different rhetorical approaches of conservatives and liberals when it comes to discussing social welfare programs and economic equity is just a result of how differently we tend to think across the political spectrum. And frankly, it's almost impossible to think with the other side's mindset once you've solidified your own. So, as someone who understands welfare programs as a practical means to achieve fair distribution of wealth and address generations of economic disfranchisement, a conservative pal to explain why he/she would agree with the candidates that these programs are tantamount to "free stuff" could be just what you need.

5. Discover A New POV On Abortion

The most popular anti-abortion "rationale" seems to be based in religious ideology, but believe it or not, the logic used by these folks can sometimes vary widely from individual to individual. For example, some justify their values with outlandish interpretations of science, while others might believe the pro-choice movement forces the government to pay for abortions, or contend that the reproductive rights movement is a smoke screen to distract from "real" political issues. Although reproductive rights haven't been a focus of any GOP debate yet (beyond ignorant statements about Planned Parenthood), maybe they'll come up on Wednesday night, and if your conservative friend happens to be anti-abortion, he/she can introduce you to a new explanation.

So, as I mentioned earlier, there's plenty of questions you could ask your right-leaning pal about the mysterious ways in which Republicans seem to think (Huckabee's comparison of Kim Davis to MLK, the "free stuff" obsession, etc.). But at the same time, your questions could invite some from your friend to ask his/her own, and could give you a chance to explain how, no, abortion rights aren't exactly the same thing as slavery and the Holocaust, or how Mexican immigrants aren't destroying the economy, or how teachers' unions actually don't deserve a "punch in the face."

7. It Could Help You Get Along Better

Of course, there's always the distinct possibility watching the debate with a conservative friend could result in a violent quarrel over the tax code or the wage gap, but some of the most inspiring friendships in history have been between individuals who were pretty much born to be enemies. (Antonin Scalia and RBG, what?) Whether the conservative you watch the debate with is a (by some great miracle) close friend or just a peer or co-worker, the chance to provide personal explanations for your own political views is bound to bring you closer.

And bonding over watching Donald Trump attack people, or Jeb Bush burying himself deeper with more 9/11 comments, or Mike Huckabee saying something homophobic, should in it of itself make you better friends. If Jeb and Hillary ever got together to hang out in the living room and watch anything, I bet every Twitter feud they engaged in over the summer could have easily been averted.