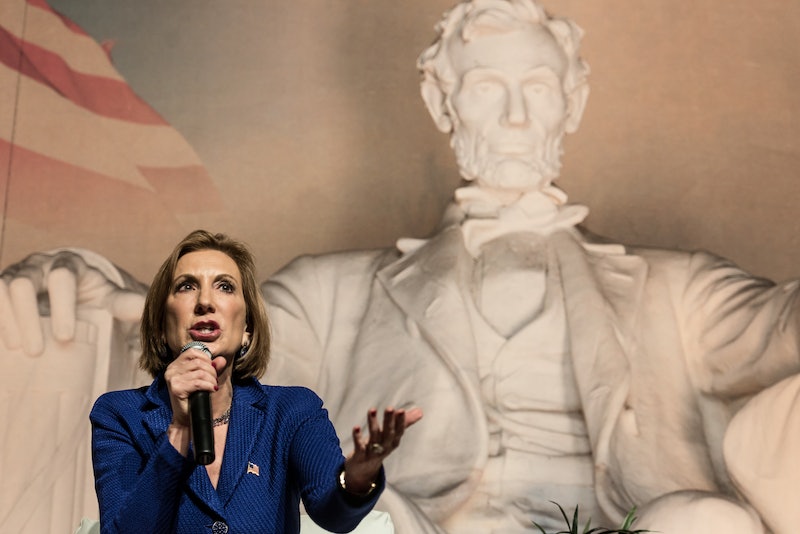 Conversation about the economy has remained relatively absent from the GOP debate stage. The first two GOP debates of this election cycle were dominated by personal attacks — sometimes directed at people not even on stage — and issues like Planned Parenthood, Kim Davis, and marijuana legalization. And out on the campaign trail, some candidates have spoken up loudly about the economy, while others have lagged behind. At this point, most of the major candidates have taken clear stances on tax reform and job creation, with one notable exception: Carly Fiorina is nowhere to be found — and the third GOP debate is the time for Fiorina to prove herself on the economy.

Donald Trump wants to make the rich pay big time, while Marco Rubio wants to cut taxes for corporations. Jeb Bush wants to grow the economy by 4 percent (like he did in Florida), and even retired neurosurgeon Ben Carson has a pretty specific plan for tax reform. Fiorina, however, has remained vague at best about her plans for the economy — that is, if she says anything at all. Given her widely criticized history as CEO of Hewlett-Packard, as well as her lack of any real "plan," it's past time for Fiorina to step it up if she hopes to capitalize on her increased standing with voters.

Here's what we do know about Fiorina's economic plan: She wants to simplify the tax code. "We need to go from what is now a 73,000-page tax code down to more like three [pages]," she said in a video posted on her campaign website. To do that, she would "close every loophole ... [and] lower every rate." While these sound like great ideas, they're not specific in the least. Any Republican — or probably any politician, in general — will tell you that our tax code is too complicated and we have too many loopholes. That's a platform that almost any voter can get behind, but it's not a plan for how to get those results. On the contrary, it sounds more like hollow rhetoric.

What's particularly interesting about Fiorina's lack of a specific economic plan is that she's typically best known for her experience in the business community. She has never held public office, and although she has been involved in conservative politics for years, she became a household name largely because of her stint as HP's CEO. Sure, running a Fortune 500 company is much different than running a country, but the economic goals are often similar: create jobs, grow the entity's profit, and reduce the entity's debt.

That's where the next interesting aspect comes into play. Fiorina doesn't have the best track record in the business community. While leading HP, Fiorina was responsible for cutting approximately 30,000 jobs and reducing shareholders' wealth by more than 50 percent. The other candidates have definitely used that against her in previous debates and conversations. Given the track record she knew she'd have to overcome and her lack of other political experience to draw from, shouldn't she be crushing the economic policy game?

It's not just about what Fiorina is saying — it's also about what she's not saying. Remember the video on her campaign website I referenced earlier? It's a video in which Fiorina attempts to answer a question submitted through her website from the general public — only, she doesn't actually answer it. The question was, "Do you support a fair tax?" Fiorina's answer goes something like, "I think we need reform; we need to lower rates and close loopholes." So, I still don't know if she supports a fair tax or not.

Fiorina shot up through the polls following the last debate, thanks in part to her pointed response to Trump's comments about her physical appearance. She has fallen since, though. As a candidate running on an iffy business background and no experience as an elected official, she can't continue to skate by on vague, open-ended responses to unanswered questions.