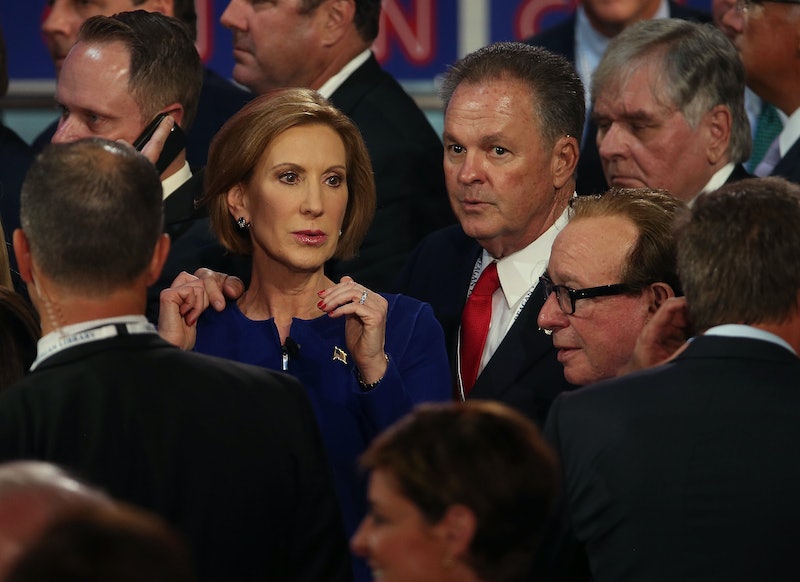 Former Hewlett-Packard CEO Carly Fiorina is definitely a 2016 Republican presidential hopeful to watch. During the first two GOP primary debates, Fiorina has proven she can hold her own against her male competitors, even against the loud-mouthed Donald Trump. But aside from her political ambitions, what do we know about Fiorina's backstory and her personal life? In 1985, Carly Fiorina married her husband, Frank Fiorina, and if the pair's charming interviews about their relationship are any indication, the Fiorinas were made for each other.

Frank Fiorina isn't Carly Fiorina's first husband, and she isn't his first wife, either. Carly Fiorina was married to Todd Bartlem from 1977 to 1984. And Frank had two children, Tracy and Lori Ann, from his first marriage to Patricia Easler Fiorina, which ended in divorce in 1981. Carly Fiorina, who has no biological children of her own, took in her husband's two children with loving arms: she wrote in her memoir that she, Frank, and the two girls "came into each other's lives when we needed each other the most." Tracy Fiorina Tribby is now 44 and lives with her family in Virginia. Lori Ann Fiorina passed away in 2009 after a long history of drug addiction.

The Fiorinas met while working together at AT&T in the early 1980s. Frank Fiorina started his career as a technician at AT&T, making just $99 a week, before moving up the ranks and becoming a manager at the company. Carly Fiorina, meanwhile, worked in the company's government communications department. Frank Fiorina asked his now-wife out after the pair worked together on a project about conference call technology (hey, it was the '80s!).

For his part, Frank Fiorina has made the couple's marriage seem nothing short of adorable. In a May interview with The Washington Post — during which a reporting and photography team accompanied him on a shopping trip to Costco — Fiorina explained that he was happy to support his wife's presidential run. When asked what his preferred term for "first gentleman" was, Fiorina responded, "I'll go by Frank." As awkward as a discount shopping trip with reporters must have been, Fiorina allowed gems about the couple's relationship to shine through, telling the Post's Ben Terris that the couple's third date "involved a lot of making out" (Terris' words).

Frank Fiorina has also been open about his decision to retire from his career at AT&T when he was 48, so that he could support his wife's career at Hewlett-Packard. And in addition to supporting his wife's career goals, he supported Carly Fiorina when she was diagnosed with breast cancer and underwent a double mastectomy in 2009. Frank Fiorina has been by his wife's side for decades, and you can bet that if she is elected president, he'll continue to support her every step of the way.

More like this
Here’s Everything You Need To Know About Operation London Bridge
By Bustle UK
Who Is Nick Cannon Dating & How Many Kids Does He Have?
By Jordyn Tilchen and Radhika Menon
How To Watch The Queen's Funeral
By Bustle UK
These 2 Women Could Be America’s First Lesbian Governors
By Tess Garcia
Get Even More From Bustle — Sign Up For The Newsletter