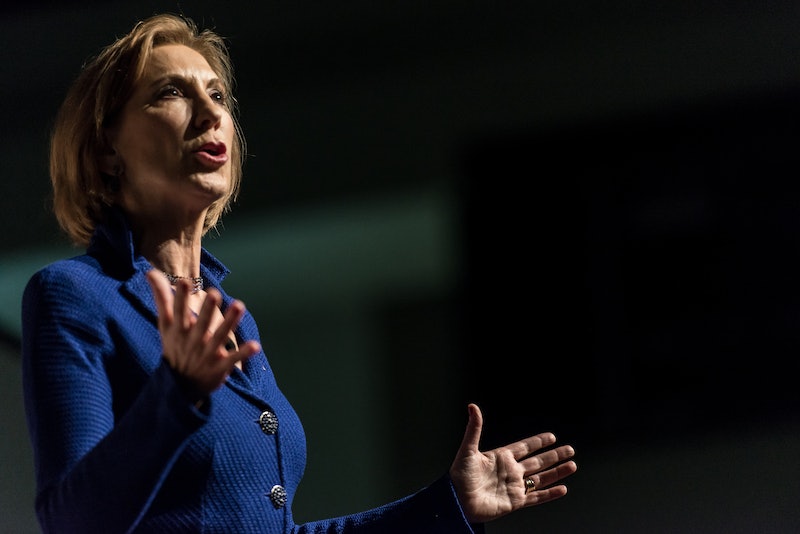 Carly Fiorina was born in Austin, Texas, and she currently lives in northern Virginia, just outside of Washington, D.C. Those two locations, however, don't even begin to cover her life story. Fiorina grew up in several different places, both domestic and abroad — although she doesn't seem to talk much about the specifics of her childhood.

While Fiorina was growing up, her father, Joseph Tyree Sneed III, progressed through a successful legal career. He was a professor at the University of Texas School of Law, which explains why Fiorina was born in Austin. Later, he moved the family to Durham, North Carolina, where he served as dean of Duke University's School of Law. While in Durham, Fiorina attended and graduated from Charles E. Jordan High School, although she only attended the school for her senior year. Before that, she bounced around four other high schools, including one in Ghana. For one year, she even attended the historic Channing School for Select Young Ladies in London. She described that experience to Forbes in 2008, saying:

Well, I took away that in an all-girls school, girls can find a million ways to get into trouble. I met some distinctly unselect ladies. It was great fun, actually, like being in a movie.

This trend of bouncing around from place to place at a young age seems to have greatly influenced Fiorina's life. She attended college at Stanford University, graduating with a Bachelor's degree in philosophy and medieval history (take that, liberal arts naysayers). She then attended law school at the University of California, Los Angeles, but she dropped out after just one year. Instead, she went on to get her MBA from the University of Maryland and a Masters of Science in management from the Massachusetts Institute of Technology.

While in her 20s, Fiorina also spent time in Bologna, Italy, where she taught English. As it turns out, Fiorina isn't the only current presidential candidate with a unique educational experience as a child. Donald Trump attended a private school in Queens, New York, until later transferring to the New York Military Academy, where he finished out his eighth-grade year and high school. Jeb Bush famously attended and graduated from the prestigious Phillips Academy in Andover, Massachusetts.

It's hard to tell which town Fiorina would consider her "home." For now, that distinction is given to Mason Neck, Virginia, a small town of just about 9,000 acres and 2,000 people. If she lands in the White House next year, it's safe to say she'd have no trouble adjusting to Washington (at least, not to the city itself).