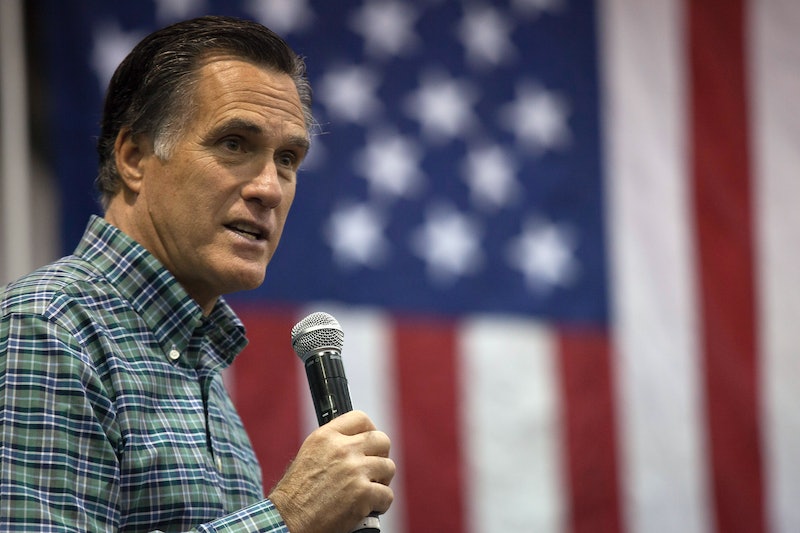 In the years following his loss during the 2012 election, Mitt Romney has had plenty of time to think about what he did wrong during the campaign and what qualities the next Republican candidate will need to sweep to victory in November 2016. But he's not ready to endorse just yet. Romney has been quick to criticize frontrunner Donald Trump for his brash views, but he has stayed quiet about who might be the best person to carry the GOP to the finish line. As it stands now, Romney won't endorse during the primaries unless it's to give an establishment candidate an edge up against someone from like Trump.

Since his announcement that he would not to run in January, Romney has taken on a role as a political adviser to several of the candidates and has tried to portray himself as an elder statesman, above the fray of the messy campaign trail but able to steer the party on big issues. Still, it's clear that Romney likes the GOP establishment. During a Q&A with Georgetown business students last month, he divided the Republican pool into two camps: "the more insurgent, outspoken, tea party perhaps bracket" and "the more mainstream conservative bracket." According to Romney, the first group houses Trump and Ted Cruz while the second group includes Chris Christie, Jeb Bush, Marco Rubio, Lindsey Graham, Carly Fiorina, and John Kasich.

Back in March when the Republican race was first shaping up, Romney complimented former Florida Gov. Bush's start, organizing campaign and finance teams while staying under the radar in the media. Romney called him "terrific" and an "effective governor." "He's a very formidable and capable candidate and I think he'd be a very good president," Romney told Yahoo's Katie Couric.

In the same interview, Romney also sang the praises of Marco Rubio, focusing on Rubio's foreign policy views. Romney endorsed Rubio during his Senate primary against Charlie Crist back in 2010. At the time, Crist was the establishment's favorite, but when it became clear he would lose the general election, Romney threw his support behind the lesser-known and more conservative Rubio.

Noticeably absent from Romney's list of potential contenders is Donald Trump. Romney has publicly criticized the candidate and in late September said point blank that Trump will not be the GOP nominee. "I will support the Republican nominee. I don't think that's going to be Donald Trump," Romney said at a forum held by The Atlantic in Washington, D.C. "My party has historically nominated someone who's a mainstream conservative."

The two keep clashing. Trump went on a Twitter tirade against Romney after Romney went on ABC's State of the Union and repeated that Trump wouldn't make it past the primaries. Romney wouldn't even commit to voting for Trump over Hillary Clinton. Since the election began, Romney has critiqued Trump's views on various occasions. In July, when Trump insulted Mexican immigrants, Romney said publicly that Trump had hurt the Republican Party.

Things weren't always so sour between the two. Back in 2012, Trump actually endorsed Romney. At one of The Donald's properties in Vegas, the property mogul endorsed Romney shortly before the Nevada caucuses. He commended Trump for creating jobs in the state, which had been hit hard by the foreclosure crisis and made jokes about Trump's business acumen and success. Romney compared himself to Trump saying he was "not quite as successful as this guy."

Nearly four years later, Trump seems to benefit from the buzz around gaffes that are similar in nature to Romney's from back in 2012. It might be hard to remember some of his gaffes as GOP nominee — "self deportation" comes to mind, as well as "binders full of women." Trumps tend to be more offensive but offend the same demographic groups.

This is one of the main reasons Romney stressed it is important to nominate someone from the "the more mainstream conservative bracket." In September, while talking to students at Georgetown's business school, he said Republican candidates need to be careful not to alienate minority voters. Romney said due to divisive comments by GOP contenders, "some minority populations look at [Republican contenders] and say, 'Wow, I guess they don't like me very much.'" Romney has admitted he lost in part due to alienating voters like Latinos, 70 percent of whom voted to reelect President Obama.

Even if Romney doesn't want to play favorites among the mainstream candidates, it seems he will do what he can to keep Trump from winning. And the GOP should take note. After all, the 2012 loser probably has a good idea at least on what not to do in order to avoid losing.