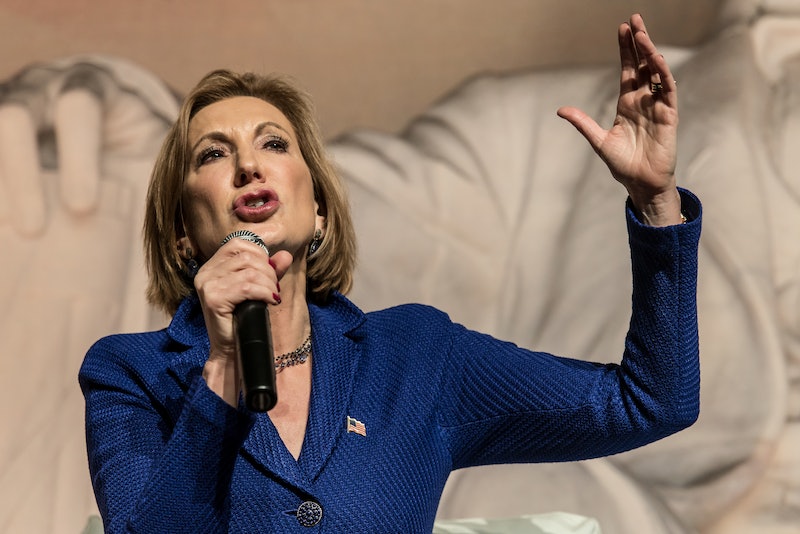 Former Hewlett Packard CEO Carly Fiorina has dropped 11 points in support over the last month, according to TIME. What has happened to Fiorina since the last GOP debate? Unlike Donald Trump and Ben Carson, Fiorina hasn't been making the headlines. This means that she hasn't been involved in as much controversy or as many feuds as those candidates, which you'd think is a good thing. But media attention this early in campaigns is what seems to be capturing the support of Republican voters. Fiorina is now polling as low as New Jersey Gov. Chris Christie and Kentucky Sen. Rand Paul, who the The Atlantic says is on "campaign deathwatch."

Fiorina came out as the winner of the second GOP debate. She refused to attack Trump, even when the moderators provoked her. Before the debate, Trump had been quoted in Rolling Stone as saying, "Look at that face! Would anyone vote for that? Can you imagine that, the face of our next president?! ... I mean, she's a woman, and I'm not s'posedta say bad things, but really folks, come on. Are we serious?"

When the moderators of the second GOP debate brought up the remark, Fiorina simply said, "I think women all over this country heard very clearly what Mr. Trump said," according to NBC News. It was classy and brilliant, especially because Trump seems to get more energy and headlines from people lashing out at him for his bullying.

After the last debate, Fiorina surged to second place at 15 percent support, and now she's at just four percent, according to TIME. Now, Trump and Carson lead, with 27 and 22 percent respectively. John Sides, who writes for The Monkey Cage at The Washington Post, has been trying to convince readers that Trump's high poll numbers are a direct result of the amount of media attention that he receives. And that theory seems to hold for Carson, too. On Sunday, Carson compared women who seek abortions to slave owners. Earlier in the month, he blamed the victims of the Oregon shooting for not rushing at the shooter to prevent him from killing people, according to The Atlantic.

Fiorina attempted to grab some of the spotlight when she insisted that she had seen a video taken at a Planned Parenthood clinic that showed an aborted fetus in a particularly graphic way. She tried to produce the video, couldn't, and then used another video that didn't show what she claimed to have seen, according to The Atlantic. The whole debacle was more confusing than anything, and maybe led to similar confusion for her initial, post-debate supporters.

The Atlantic speculates that the people who support Trump, Carson, and Fiorina are those who want an "outside" candidate, or someone who is outside of the established Republican party, where money and influence hurt transparency. That group of "outsiders" is relatively small, and it's heavily split between Carson and Trump. Fiorina hasn't been getting enough attention, so she has lost a good number of the outsiders. This debate could help her get that back, but only if she delivers a performance on par with her last.