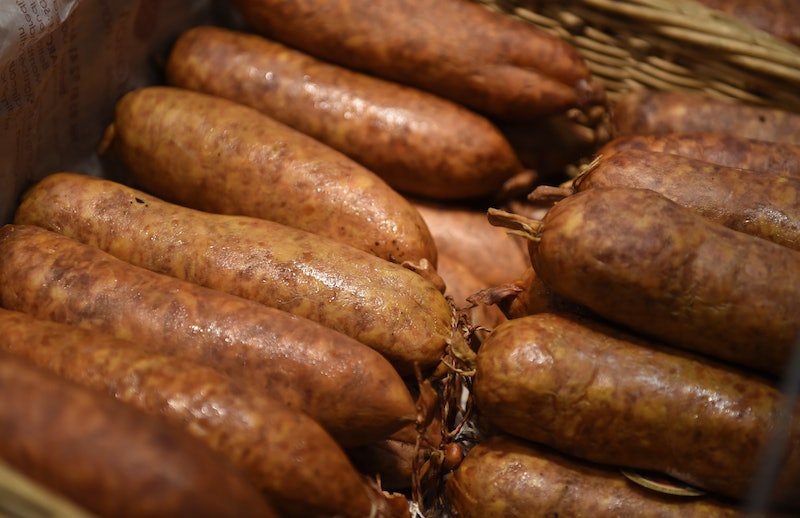 Processed meats also include hot dogs and hamburgers, and red meats include beef, pork, and lamb, according to NBC News. The WHO report was released alongside a new International Agency for Research on Cancer report, which cited many studies that found links between red and processed meats and cancer. What's most notable about this report is that the IARC doesn't use phrases such as "may cause" or "contributes to" — phrases that have been used to soften previous, similar findings. The IARC states with clear and direct language that processed meats do cause cancer. In addition to smoking, the WHO will issue new guidelines that list processed meats as a cancer risk on the scale of asbestos, according to The Guardian. The IARC said this report should show people just why meat consumption should be cut down:

The IARC noted that an average person's risk of developing an condition like colorectal cancer remains small, but that it will be increased when more meat is consumed. There are nutrients and proteins found in meats that contribute to a healthy diet, which means that occasionally consuming meat is totally fine. But it's the inclusion of meat as a daily staple that contributes to health problems such as cancer, heart disease, and Type 2 diabetes.

The average American in 2012 consumed about 0.36 pounds of meat per day, which is about 163 grams, according to The Wall Street Journal. Given the risk associated with consuming 50 grams of processed meats per day, this is very high. Professor Tim Key, from the Cancer Research UK and the University of Oxford, told BBC News that cutting back is the easiest way to control your risk:

This decision doesn't mean you need to stop eating any red and processed meat, but if you eat lots of it you may want to think about cutting down. Eating a bacon bap [a bacon sandwich with buttered bread and sauce] every once in a while isn't going to do much harm — having a healthy diet is all about moderation.

At current levels of consumption, the IARC said meat consumption and the impact on cancer incidence is "of public health importance," according to NBC News, but that it can be solved with better dietary decisions.

More like this
The 5 Best SLS-Free Toothpastes, According To Dentists
By Amy Biggart and Danielle Calma
Got Brain Fog? Here Are The Best Supplements For Memory & Cognition
By Carolyn Steber
Amazon Is Selling A Ton Of These 50 Things That Seem Expensive But Are Cheap AF
By Julie Peck
TikTok's Butter Board Might Be The New Cheese Plate
By Emma Carey
Get Even More From Bustle — Sign Up For The Newsletter