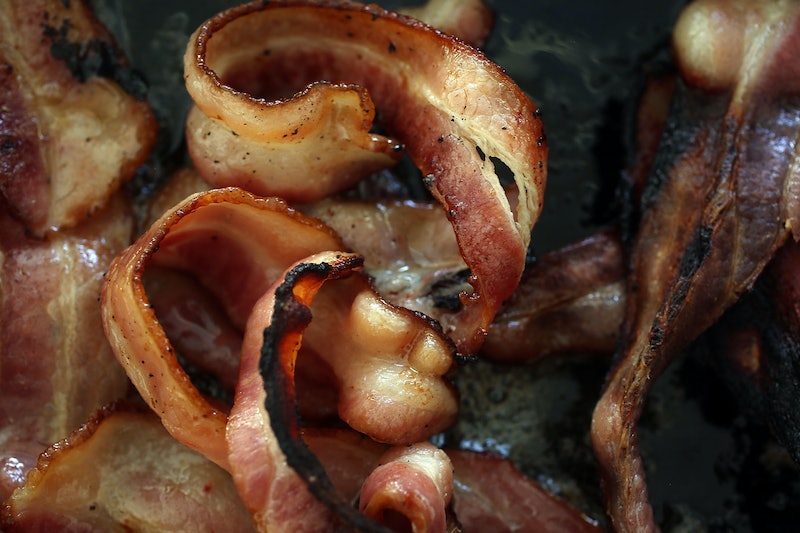 The World Health Organization released a report Monday that firmly stated that processed meats cause cancer. Honestly, this isn't new news. We have known that processed foods are bad for us for quite a long time, and we definitely know that eating too much meat can lead to serious health problems. But we do it anyway, because we live in a culture in which eating meat is both celebrated and politicized. We also know that pollutants in the air could be contributing to cancer risk, and that things like smoking and tanning beds cause cancer. So it's no surprise that one of the most-liked comments on BuzzFeed's Facebook post about the WHO report says "Everything causes cancer." No, everything does not cause cancer, and saying "everything causes cancer" is insensitive to people who have lost loved ones to the disease. Instead, we should be embracing information that could help people make potentially lifesaving decisions about their health from an early age.

My mother died of cancer when I was 20. Before she was diagnosed at age 49, she did yogalates every day. She could do that stretch where you sit down and reach between your legs, and she could fold forward far enough that her torso would be flat on the ground. It was really impressive. She was on top of her health because she had fought breast cancer when I was in elementary school. I think the threat of not being around for her children had a harsh impact on her, so after she beat breast cancer, she started eating healthier and exercising. Ten years later, she was declared cancer-free, which was supposed to mean that her chances of the cancer coming back or spreading to another part of her body were slim.

It was when I was 18 that my mom began having abdominal pains, which our then-doctor just treated with medication. Finally, when she went to the ER with severe pains, she was diagnosed with stage 4 primary peritoneal cancer in the lining of her uterus. Breast and some gynecological cancers are genetically linked, but doctors had assured her that her breast cancer hadn't spread. This means that something else must have contributed to her risk, but knowing how healthy she was when I was growing up, it seemed like the second round of cancer appeared out of nowhere.

Her death baffled me, because not only was she my best friend, but she was also extremely healthy before she was diagnosed with cancer for the second time. Sure, before she was diagnosed with breast cancer, she drank a lot of alcohol and ate a lot of red meat, but surviving breast cancer later made her a queen of the healthy eating movement. I didn't consider until I was older that maybe her health decisions earlier in life contributed to her risk for breast cancer and even other cancers for which she had a genetic predisposition. Plus, my mother didn't grow up in a time when people knew about risk factors for cancer. She didn't have a Facebook feed that told her when a new risk factor had been discovered, and how she could change her diet accordingly. It wasn't her fault.

That's why it really hurts me when a study comes out, like the WHO study, and people dismiss it with a phrase as insensitive and shallow as "Everything causes cancer."

It's not true. We know that smoking causes esophageal and lung cancer, yet people still do it. We know that not wearing sunscreen during exposure to the Sun increases your risk of skin cancer greatly, but again, people still use tanning beds or don't wear sunscreen. And these are very specific things that contribute to cancer risk. There are also many things that don't contribute to cancer, and which actually lower your cancer risk. For example, running on a treadmill doesn't cause cancer, and red fruits and vegetables have cancer-fighting properties. Riding your bike is enriching, and it doesn't cause cancer.

And over the last 20 years, experts have become more and more clear about what does or doesn't contribute to cancer risk. When scientists aren't sure of the evidence, they say so, like how the WHO report said that red meat "probably" contributes to risk. Experts are giving people ways to combat cancer — the second-most-common cause of death in the U.S. — before it even starts, and people are just rolling their eyes and being snarky.

We attempt to brush off studies like this because many of the things we see as enriching, like eating red meat every day, are actually harmful to us, and that's just a fact of life. But brushing it off doesn't make it any less of a fact. Saying "everything causes cancer" is an ignorant way of not owning up to poor health decisions. Instead, if people see a study linking cancer to something they like, they should say, "OK, this causes cancer, and I will either cut back or accept the consequences of not doing so." But admitting to understanding the consequences wouldn't brush the study off in the way that rallies likes on a Facebook post. And it also opens people up to considering potential ramifications, like not being around for their future children or loved ones. That's a reality which people would rather not face, especially when the alternative is just joking about how everything you love "causes cancer."

Not only does the statement "everything causes cancer" put people in danger by making it uncool to care about your health and maybe give up bacon or sausage, but it's also insulting to people like me, who have lost a loved one to cancer. We want this kind of information because we do not want anyone else to feel our pain (at least, that's the way I feel). Saying that "everything causes cancer" is a slap in the face to medical science, which is trying to make it so we lose fewer amazing people like my mother to disease.

"Everything causes cancer" causes me pain each time I see it, because it feels like another nail in the coffin for someone who could have risks similar to my mother's, who are just one preventative step away from reducing their risk of death from cancer. People should be embracing this new information, or at least thinking critically about it — not dismissing it in such a tactless way. I like to think that with the right information about our diets and health, people could be able to control their risk for cancer, and preempt it better than my mother did.

If we learn from studies like this, then we can respond and change our culture and our diets. If this kind of information was available when my mother grew up, maybe she could have made small decisions early in life — like I am now — to lower her risk and live to see her daughter graduate college. But if "everything causes cancer" and people continue to dismiss vital information about their health, then they will continue to risk losing themselves, their mothers, and other loved ones to cancer unexpectedly. At least, until there's a big movement to take health more seriously.

More like this
Rachel Zegler Reveals She Had Breast Cancer Scare
By Radhika Menon
TV Schedules Undergo Major Changes For The Queen's Funeral
By Sam Ramsden
The 9 Best Exercises For Piriformis Syndrome Relief
By Carolyn Steber
The 5 Best SLS-Free Toothpastes, According To Dentists
By Amy Biggart and Danielle Calma
Get Even More From Bustle — Sign Up For The Newsletter