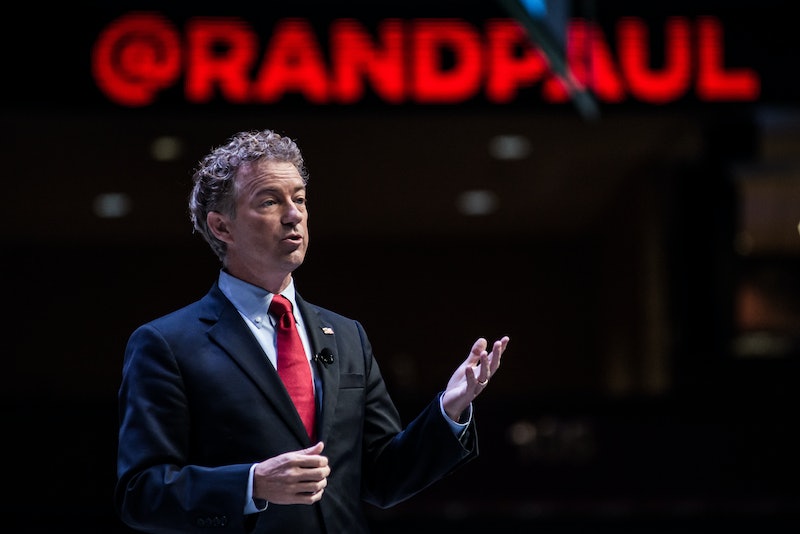 With each new GOP debate comes the inevitable questions: Which candidates of the double-digit group will participate in the prime-time debate, and which will be sequestered to the earlier "kids table" forum? The third Republican debate, hosted by CNBC on Wednesday, will have different requirements than the two previous events. This had a few candidates' participation up in the air, including that of Rand Paul. Because his polling numbers have dipped pretty low in recent weeks, there's been speculation about whether Paul will be at the prime-time debate.

In the last two Republican debates, candidates only had to have one percentage point's worth of support in the polls to participate in either debate, with the top 10 being chosen for the prime-time debate. However, CNBC mixed things up and decided that only candidates with at least three percent of support in national polls from the last five weeks would be invited to attend its prime-time debate, keeping the one-percent rule for the 6 p.m. event. CNBC did offer a little bit of relief to struggling candidates, saying that polling averages of 2.5 percent or higher would be rounded up to three percent.

The news organization announced the debate lineup last week, showing that Paul barely made the cut, with three percent. So yes, he will in fact be in the prime-time debate. His already-low poll numbers dropped since the second debate, when he ranked eighth with 4.7 percent in the polls.

Paul wasn't the only one who barely scraped by — John Kasich and Chris Christie also came in at three percent, and Mike Huckabee had only 3.56 percent. Along with Paul, Kasich, Christie, and Huckabee, Ted Cruz, Carly Fiorina, Jeb Bush, Marco Rubio, Ben Carson, and Donald Trump will grace the stage shortly after 8 p.m. on Wednesday.

Rick Santorum, Bobby Jindal, George Pataki, and Lindsey Graham met the minimum requirement of one percent, and will participate in the earlier forum. Once again, Jim Gilmore didn't meet the requirements and won't be in attendance.

The third GOP debate, titled "The Republican Presidential Debate: Your Money, Your Vote," will take place at the University of Colorado Boulder's Coors Events Center. It will be moderated by Carl Quintanilla, the co-anchor of CNBC's Squawk on the Street and Squawk Alley, Becky Quick, co-anchor of Squawk Box, and John Harwood, chief Washington correspondent. According to CNBC, the questions will focus on "the key issues that matter to all voters," including job growth, taxes, technology, retirement, and the national economy.