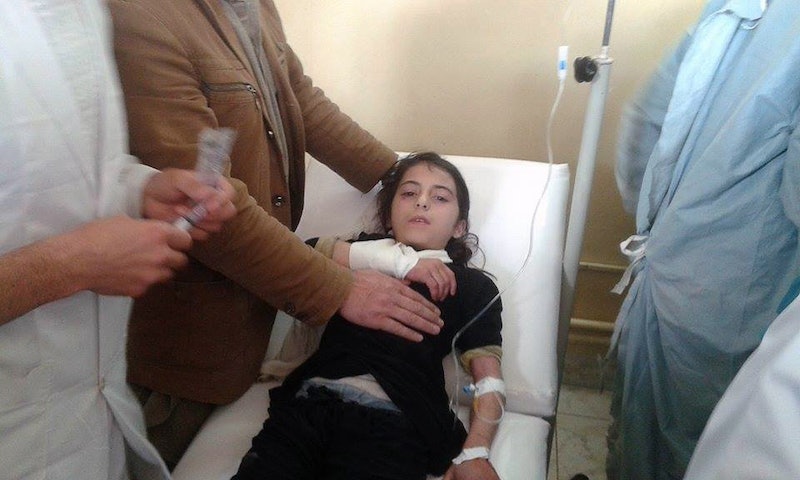 Tragedy struck Afghanistan’s Takhar province Monday when 12 Afghan schoolgirls were killed during a 7.5 magnitude earthquake. Local officials reported at least 34 fatalities, although authorities from across the rest of the country, as well as India and Pakistan, have reported a total of at least 229 deaths overall, with hundreds more injured. In Takhar, however, the deaths of the 12 schoolgirls were particularly distressing. According to the AFP, a panicked crowd, rather than falling debris, crushed the students before they were able to make it out of the building to safety.

“The students rushed to escape the school building in Taluqan city after the terrifying quake, triggering a stampede,” Enayat Naweed, the region’s education department chief, told AFP reporters Monday. The Bibi Hajra high school students killed on Monday were all under the age of 16, officials added.

Police on the scene told reporters that the schoolgirls had been between the ages of 10 and 15, and were attempting to climb a stairwell between the first and second floors when chaos broke out and the students were crushed beneath a crowd of terrified classmates. After the tremors stopped, parents and loved ones waiting to hear of the students’ fates were handed the tragic news.

“When the aggrieved relatives of the dead students came to collect their bodies, they were so distressed that they could not even talk to authorities to record their names,” Hafizullah Safai, head of Takhar’s health department, told the AFP in a statement.

More than 30 other students were reportedly injured in the stampede, according to The Asia Times. The school itself, however, was largely untouched. One official claimed that the design of the building may have actually contributed to the death toll.

“No school was [severely] damaged in the quake,” said Taluqan governor spokesman Sonatullah Timor in a comment to The Asia Times. “However, there was a lot of panic, and, because there is only one exit at a school leading from the second to the ground floor, some of them could have died in the crush.”

For students in Afghanistan’s northern provinces, life is already difficult enough, with “insecurity, malnutrition … poverty” and age- and gender-related stressors weighing heavily on young students each day, as Aikins pointed out. Adding a natural disaster or militant threat to the mix only amplifies the panic.

Instead of being killed by falling debris, “they fell under the feet of other students,” Abdul Razaq Zinda, provincial head of the Afghan National Disaster Management Agency, said in a statement Monday, lamenting the heavy loss. “The death toll is expected to keep rising,” added Nangyalay Yousufzai, head of Nangarhar Red Crescent Society, in a comment to the AFP.