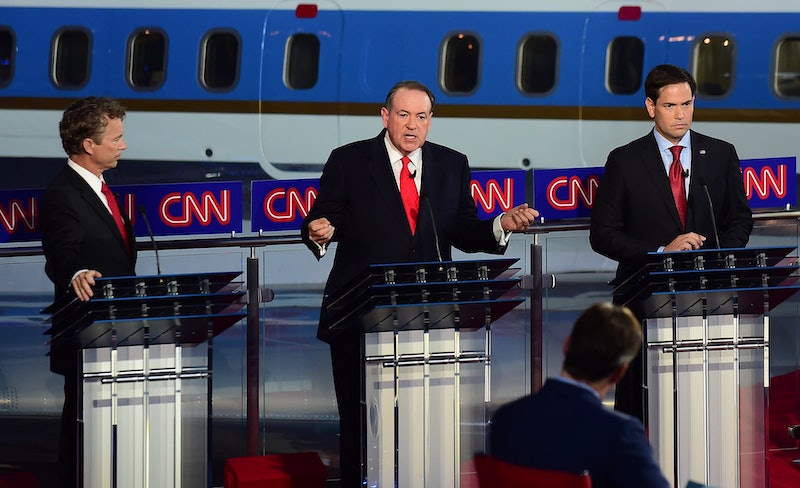 With the first of the GOP primaries just around the corner, the battle for the White House is about to get ugly. Of course, with Republican candidates like billionaire real estate mogul Donald Trump in the running, that's already happened in some respects, but given that the brash frontrunner is dropping in the polls in several key states, the mud-slinging is about to get even worse. Which is exactly why the next GOP debate is more important than all the rest. So what makes this one so crucial?

Think of the first two debates as Presidential Practice 101. The content is varied and the topics are broad, so everyone thinks they have a shot at graduating with a degree in White Houseology. Fast forward three semesters to Advanced Political Non-Methodology, and the students are dropping like flies, desperately clinging to whatever bits of knowledge they've accumulated over the fast-paced climb and praying to God that they don't accidentally oversleep on the morning of the big primary (for now, let's call it the "midterm"). If the Republican race were a university classroom, Jeb Bush would be the dynasty student dying to study art history at Brown instead, Donald Trump would be the smart-aleck who got in because his dad is "really rich," and Ben Carson would be the 18-year-old who mysteriously got into the school on a floral arranging scholarship.

In real life, the midterm is fast approaching, and few of the candidates are truly prepared for what's about to hit them like a ton of bricks: reality. Whether it's a siphoning-off of those who only joined the 2016 race to gain fame (or notoriety), a terrible misstep, or a poorly-timed comment, this week's GOP primary debate is a crucial step for candidates looking to get to the next level, for several reasons.

Dynasty student Bush has been sitting pretty for a while, but the past month or so hasn't been so easy for the former Florida governor. Since late September, Bush has been steadily dropping in the polls, most recently finding himself in fifth place, behind rivals Ted Cruz and Marco Rubio. After months of feuding with Trump over his brother's presidential legacy, Bush needs to refresh his campaign at Wednesday's debate (without dropping the words "Iraq," "Bush Doctrine," or "safe"). Otherwise, he risks an even steeper decline among those who have started seeing Bush for what he really is: unoriginal.

The Demise Of Donald Trump (?)

According to a Monmouth University poll released on Monday, retired neurosurgeon Carson has managed to overtake Trump in the key state of Iowa, rising nine points at the same time that Trump has lost five, and pushing into the lead with 32 percent of the prospective vote. While its still too early to tell who's going to win the eventual GOP nomination, if Trump doesn't come up with some new material during the next primary debate, voters could start to become noticeably agitated with his broken-record schtick (there are only so many times you can talk about your wealth, China, and immigrant-bashing). His rivals will easily overtake him in the polls, leaving him millions of dollars short and his campaign dead in the water. It might take some time for that to happen, but Wednesday will undoubtedly be the first step in either direction.

People love Ben Carson. People hate Ben Carson. Nothing about Ben Carson's ability to divide a room is surprising — however, it's his ability to divide his own party that's now up for debate. With new surveys showing Carson wielding a much-needed bump in the GOP race, the proudly nonpolitical candidate will be front and center at this week's primary showing. And if he under-performs and brings his wild rise to a grinding halt, it's likely going to be that much harder to win the eventual nomination.

After months of accusations that he was "too nice" to be president, Carson subsequently threw down a gauntlet for his fellow candidates, drawing comparisons between Obamacare and slavery, gun control and the Holocaust, and then drudging up the slavery talking point once more this week, pondering the connection between abortion and lazy abolitionists. Swinging dangerously between being sedated and making viewers uncomfortable might make for good television, but it also makes for terrible debate performance. If Carson isn't careful about consistency, he could not only lose his edge, but he could also lose followers. Or he might pull a Scott Walker and gradually begin digging his own grave.

Weeding Out The Weak

While much of the focus in the GOP race has been placed on Trump, Bush, and Carson, candidates like Florida Sen. Marco Rubio and Ted Cruz have been biding their time, waiting to pounce at just the right moment. For Cruz, all bets are squared on an eventual Trump dropout, after which the Texas senator is hoping to nab the empty slot left in his wake and scoop up his supporters one by one (which has been obvious from the serious bromance brewing between the two candidates in recent months). For his part, Rubio seems frustrated that the majority of voters have yet to consider him presidential material, even going so far as to threaten a "White House or bust" congressional move this week.

For the remainder of the pack, it's been largely downhill since September's second primary debate. Former HP CEO Carly Fiorina easily won the September 16 showing, but has been on a downward spiral in the weeks after, fizzling in the polls and losing whatever fuel was left in her tank. At less than three percent support, candidates such as former Arkansas Gov. Mike Huckabee, New Jersey Gov. Chris Christie, and Kentucky Sen. Rand Paul have exiled themselves into the land of has-beens. Scraping the bottom of the barrel are outliers like John Kasich, Lindsey Graham, Bobby Jindal, George Pataki, and Rick Santorum, most of whom will be weeded out in the coming weeks.

For the majority of the GOP candidates, Wednesday's debate will either be a Hail Mary pass or a historic moment that will determine who makes it through to the next round. All that's left to do is sit back and wait for the field to pare itself down so that voters can finally start to vet some serious contenders.