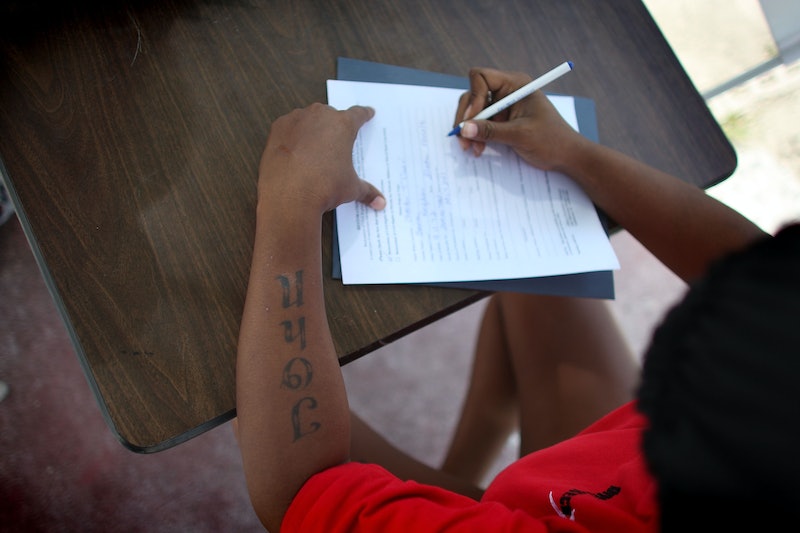 On Monday, activists with the American Civil Liberties Union (ACLU), Color of Change, the National Employment Law Project (NELP), and other organizations delivered a petition with more than 65,000 signatures to the White House, demanding that President Obama "ban the box" for all federal employers and contractors. The Ban the Box movement centers around the belief that the box on job and college applications which asks about an applicant's past criminal convictions is discriminatory against people with criminal records, as it makes it much harder for them to be chosen. In order to truly be an equal-opportunity employer, the federal government needs to ban the box so that prior criminal records aren't held against people seeking a job — just as gender, race, ethnicity, religion, and sexual orientation aren't supposed to be factors when choosing employees.

The organizations behind the petition called for President Obama to take executive action to stop this form of discrimination. Color of Change's website clarifies that Ban the Box policies still allow for background checks later on in the hiring process, but eliminate the initial question on applications, which usually leave no room for details about the convictions. Its website says: "These reforms are critical to reducing the Black unemployment rate, strengthening our economy, and meeting the state's goal of significantly reducing recidivism and prison overcrowding over the long term. All citizens will benefit when people with past convictions are no longer shut out of jobs and can financially support their families and contribute to the economy."

The ACLU wrote a letter to President Obama in March urging him to issue an executive order banning the criminal record box on federal agencies' and federal contractors' job applications. The letter points out that nearly one in three American adults has some form of criminal record that would show up in a background check, and says: "This creates a serious barrier to employment for millions of workers, especially in communities of color hardest hit by decades of over-criminalization."

Nineteen states and more than 100 cities nationwide have banned the box, adopting "fair hiring" policies which prohibit state agencies and contractors from asking about applicants' criminal records on initial job applications, and seven states have extended the ban to private employers. Although Washington D.C. has banned the box, the federal government still allows its agencies and contractors to use it on applications.

A prison sentence is a punishment for a crime committed, and once you've served your time and maybe a few years of parole, there aren't supposed to be continuous punishments, as you've already paid your debt to society. Having potential employers immediately judge your application based on the fact that you've check the "criminal history" box is a form of punishment that follows you for life. In order to be contributing members of society and support themselves and their families, the formerly incarcerated need to be able to work.

Just like it would be discriminatory to throw out a job application because of the applicant's gender, race, ethnicity, religion, or sexual orientation, the same is true of criminal history. Of course, there are some jobs that require background checks, such as positions at schools, but "fair hiring" policies don't prohibit criminal background checks. For applicants with a record, eliminating the box allows their application to be reviewed without the stigma of a conviction clouding an employer's impression of them. And if there is a background check later on, the employer will have more details about the type of conviction, as opposed to a simple box checked "yes."

If the federal government wants to fully eliminate discrimination in its hiring processes, then it needs to ban the box so that formerly incarcerated Americans stand a chance when applying for a job. The government is supposed to set an example for the rest of the country. If it discriminates against potential employees, how can we expect private employers to not do the same? Americans with criminal records deserve to be considered for jobs.