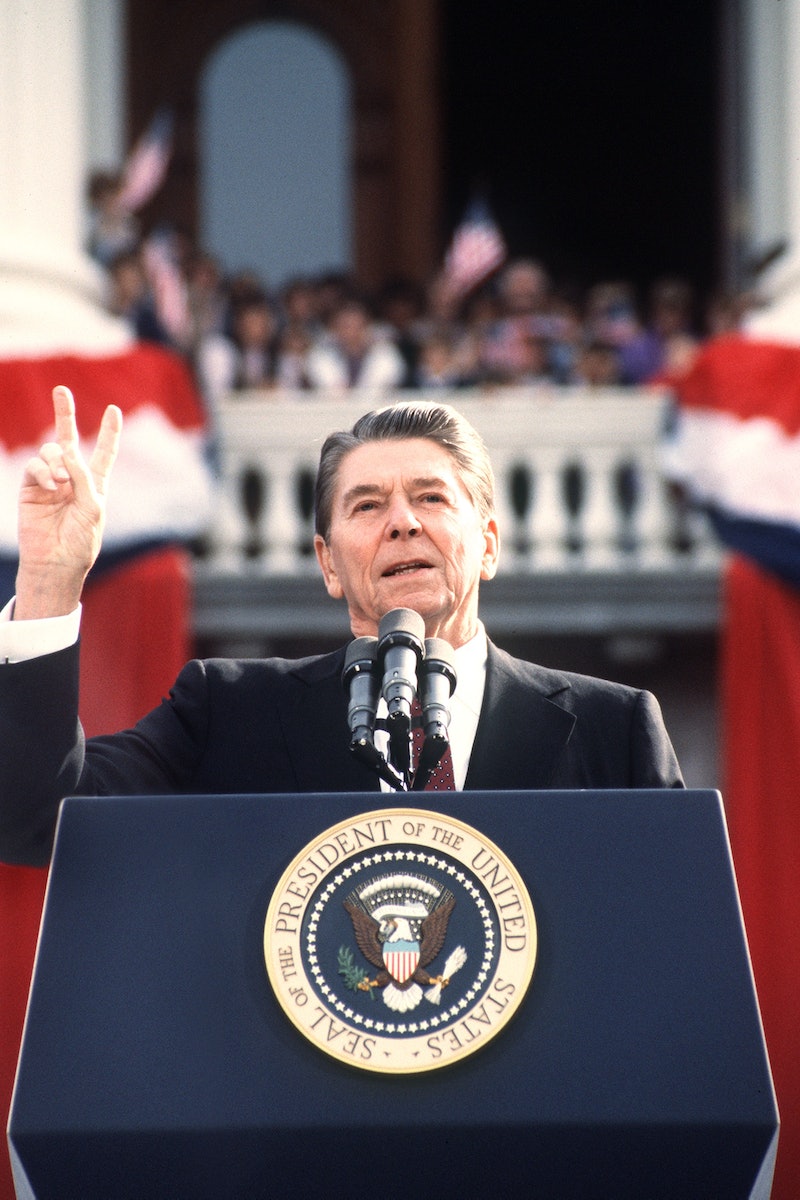 The GOP presidential candidates will present their plans for the American economy at Wednesday's debate. Only years out of the worst economic recession since the Great Depression, voters are eager to hear what they have to say. Each hopeful has a slightly different view on how the government should spend and save money. Throughout its history, Republican presidents have passed impactful economic policies, which forever changed the way American citizens use their money.

In recent years, the Republican Party has earned a reputation for favoring tax cuts for the wealthy and limiting government spending. But interestingly, this has not always been a common policy for the GOP. The party's views on economics have shifted through its existence — influenced by war, foreign policy, and domestic issues. From Abraham Lincoln to George W. Bush, Republicans have increased government involvement in the economy, favored a Keynesian style of public sector regulation, then shrank government involvement in favor of a more laissez faire philosophy. They fought big business interests in the name of the middle class, then issued huge tax breaks for the richest citizens. Here are a few of the Republican presidents' most important contributions to the economy.

A reflection on the greatest contributions of Republican presidents would be incomplete without those of Abraham Lincoln. Perhaps Lincoln's most impactful economic policy was his support of the first transcontinental railroad. The Pacific Railway Act of 1869 led to the construction of the Union Pacific and Central Pacific lines, creating a major hub in Chicago and making the city one of the largest and most populated in the nation. It was a unifying measure, both symbolically in a time of civil war and economically for the transportation of people and goods. Interstate travel time was reduced by weeks, making goods cheaper and faster to receive. The railroad ushered the United States into a competitive global economy.

The Republican Party was in a very different place a century ago. The first President Roosevelt was a diehard progressive, and his "Square Deal" domestic plan sought to help the middle class and break up monopolizing trusts. He signed legislation that empowered the government to regulate corporations through such entities as the Interstate Commerce Commission. He also pushed for the construction of the Panama Canal, which revolutionized international commerce.

Faced with rising inflation during the Vietnam War, President Richard Nixon announced in 1971 that the U.S. dollar would no longer be convertible to gold. "The Shock," as it came to be known, was the beginning of the end of a fixed currency in the United States. Previously, foreign nations had the power to exchange U.S. dollars for their equivalent in gold. At the time, the value of one ounce of gold was $35. The Treasury's supply of gold was unable to keep up with the demand of allies, such as the U.K., so Nixon and his advisors scrapped the whole system. The end of the gold standard resulted in increased inflation and one of the worst recessions in American history. According to The Wall Street Journal, Nixon's "Shock" rose the value of gold to a dramatic $800 per ounce by the mid-70's.

Reaganomics And The 80's

Love them or hate them, the policies of President Ronald Reagan infamously changed the way Republicans view economics, and greatly impacted the nation. His "trickle-down" or "free market" measures cut government spending, regulation, and income tax. Forbes reports that his policies successfully cut inflation, created 20 million jobs, and allowed the economy to grow by one-third. These quick results are the reason contemporary conservatives laud the Reagan era to this day.

The long-term effects of Reaganomics are more controversial. Republican candidates like to compare themselves to Reagan, but Reagan's budget director David Stockman told Rolling Stone the GOP has changed for the worse since the 80's. "The Republican Party has totally abdicated its job in our democracy, which is to act as the guardian of fiscal discipline and responsibility," Stockman said. "They're on an anti-tax jihad – one that benefits the prosperous classes."

President George W. Bush passed two major initiatives to cut taxes, in 2001 and in 2003. Inarguably, the cuts benefited wealthy Americans the most. The wealthiest 0.1 percent — those making over $3 million per year — got to keep an extra $520,000 every tax season. Supporters stand by the notion that cutting taxes for the rich promotes job growth, while critics blame Bush's policies for the United States plunging into a terrible recession in 2008. Economists say that the Bush era tax cuts are partly responsible for the major budget deficit the government now faces.