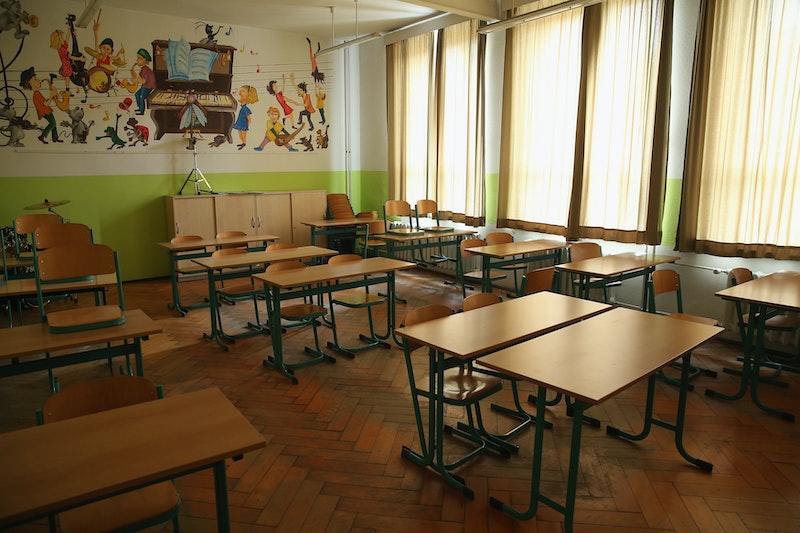 After video footage of an intense arrest encounter between a student and school resource officer at a South Carolina high school made its way around various social media platforms on Monday afternoon, the incident began flooding public forums and media headlines. Another student managed to capture the encounter on their cellphone, and a second video was uploaded to South Carolina NBC affiliate WIS' website where it too began gaining traction. By Monday evening, questions surrounding the identity of the Spring Valley High School officer who made the arrest were finally answered.

According to a report by The Daily Beast, Senior Deputy Ben Fields, 34, was on loan from the Richland County Sheriff's Department and had been with the school for some time before the incident in the video occurred. In a statement Monday, Sheriff Leon Lott confirmed that Fields had been called to the Spring Valley classroom in response to a student who had allegedly been "disturbing school" and had refused to leave the room when asked. Fields has been placed on administrative duty and is not currently allowed to work in any Richland School District Two school. Bustle has reached out to the department for comment.

In the video footage produced by student witnesses, Fields is seen addressing the unnamed student in question, eventually making his way to her desk and placing one arm around her neck when she does not respond to him telling her to come with him. This causes the student to tip backward in her chair, flipping her over, and then the officer drags her around the desk and out of the frame where the student was later arrested for disturbing school and resisting arrest.

According to his now deleted personal Twitter account, Fields works as a Richland County deputy sheriff, a "football coach (defensive line)," and a "strength coach at Spring Valley High" in addition to his job as a school resource officer. A profile on the school's athletic department page also indicated that he had been in charge of the high school strength and conditioning program since 2013. According to The Daily Beast, Fields' Facebook profile was deactivated or deleted by Monday evening.

The alleged incident was not the first time Fields has run into trouble with civilians: In 2007, Fields was sued in federal court for allegedly violating the civil rights of two black citizens. According to court documents, plaintiff Carlos Martin claimed Fields had approached him after Martin nodded in a friendly manner while walking back into his apartment complex. Martin claimed that Fields began asking him whether he was the source of noise complaints from another tenant, and then arrested both Martin and his wife, Tashiana Anita Martin, who recorded the incident on her phone. Fields claimed Martin was playing excessively loud music in his vehicle and then was "boisterous" and used profanity toward Fields before resisting arrest, so he used force. Martin claimed Fields had also "made ridiculing and suggestive comments that he was going to take ... [Mrs.] Martin to a Motel 6," which Fields denied. The charges were later dropped after prosecutors failed to show up for court.

On Monday, Richland School District Two Superintendent Dr. Debbie Hamm sent a statement to Bustle regarding the Oct. 26 incident, explaining that Spring Valley administrators and District investigators were working with officers to look into the matter further:

Our District is deeply concerned about an incident that occurred at Spring Valley High School today. The incident took place between a school resource officer employed by the Richland County Sheriff's Department and a student. Video of the incident is circulating on social media.

Student safety is and always will be the District's top priority. The District will not tolerate any actions that jeopardize the safety of our students. Upon learning of the incident, school and district administrators began an investigation. We are working closely and in full cooperation with the Richland County Sheriff's Department to conduct a thorough and complete investigation. Pending the outcome of the investigation, the District has directed that the school resource officer not return to any school in the District.