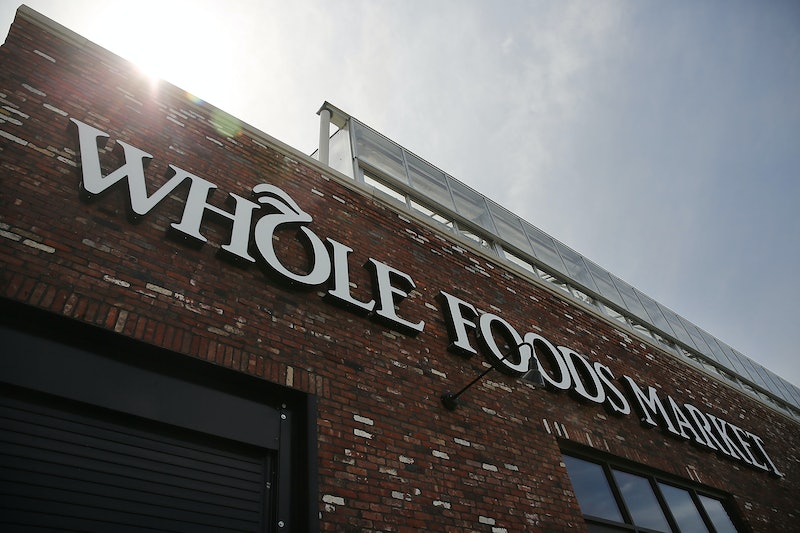 According to a press release issued by the Food and Drug Administration Friday, Whole Foods Market is recalling Curry Chicken Salad and Classic Deli Pasta Salad sold in stores across seven different states: Maine, New Hampshire, Massachusetts, Rhode Island, Connecticut, New York, and New Jersey. The voluntary recall comes after the bacterium Listeria monocytogenes was detected during a routine inspection of Whole Foods Market's North Atlantic Kitchen facility, according to the FDA. "Whole Foods Market of Cambridge, Massachusetts, is recalling bulk and packaged Curry Chicken Salad and Classic Deli Pasta Salad sold in stores in ME, NH, MA, RI, CT, NY and NJ because it has the potential to be contaminated with Listeria Monocytogenes," read the FDA statement about the recall posted on Whole Foods' website Friday. Bustle reached out for comment Monday, but a rep for Whole Foods could not immediately be reached.

The voluntary recall comes after the bacterium Listeria monocytogenes was detected during a routine inspection of Whole Foods Market's North Atlantic Kitchen facility, according to the FDA. Luckily, though, no illnesses have been reported.

As for the salads affected, the press release states that they were sold "prepackaged, in salad bars, in store's chef's cases, and in sandwiches and wraps prepared in the stores." They were, however, sold in stores during a relatively narrow window of time — between Oct. 18 and Oct. 22, 2015, with a "sell by" date was of Oct. 23, 2015. The specific items recalled include:

While symptoms can be mild in otherwise healthy individuals — ranging from short-term fevers, headaches, and stiffness to nausea, stomach pains, and diarrhea — in others, they can be far worse. The CDC reports that eating foods contaminated with Listeria monocytogenes can often lead to listeriosis, a serious infection that largely affects the elderly, pregnant women, newborns, and adults with weakened immune systems. In fact, Listeria infections have been known to cause miscarriages and stillbirths in pregnant women, who are about 10 times as likely to contract the bacterium. The incubation period for listeriosis also ranges — from just three days to 70 days, with the most extreme cases leading to hospitalization.

This is the grocery store giant's second recall in one month over Listeria concerns. The other happened in early October, when Whole Foods voluntarily recalled Papillon Organic Roquefort cheeses for the very same reason. In that case, the recall affected all cut, wrapped, and weighed Papillon Organic Roquefort cheeses with the scale stickers PLU 029536, according to the FDA.

If you're worried you might have one of the recently affected deli salads in your fridge, the FDA and Whole Foods Market both urge you to throw the item out and seek medical care immediately if you begin to experience any of the above symptoms. You can also call your local store or Whole Foods' customer service department at 617-492-5500 between the hours of 9 a.m. and 5 p.m. EST with any questions, and visit your nearest Whole Foods store with your receipt to be issued a full refund.

More like this
Do Green Powders Work As Well As TikTok Says They Do?
By Carolyn Steber
An Expert Weighs In On The Viral Raw Carrot Salad Trend
By Alexis Morillo
Here’s Where The NHS Nurses’ Strike Currently Stands
By Sophie McEvoy
50 Cheap Things On Amazon You'll Get A Ton Of Use Out Of
By Rebecca Martinson
Get Even More From Bustle — Sign Up For The Newsletter
From hair trends to relationship advice, our daily newsletter has everything you need to sound like a person who’s on TikTok, even if you aren’t.