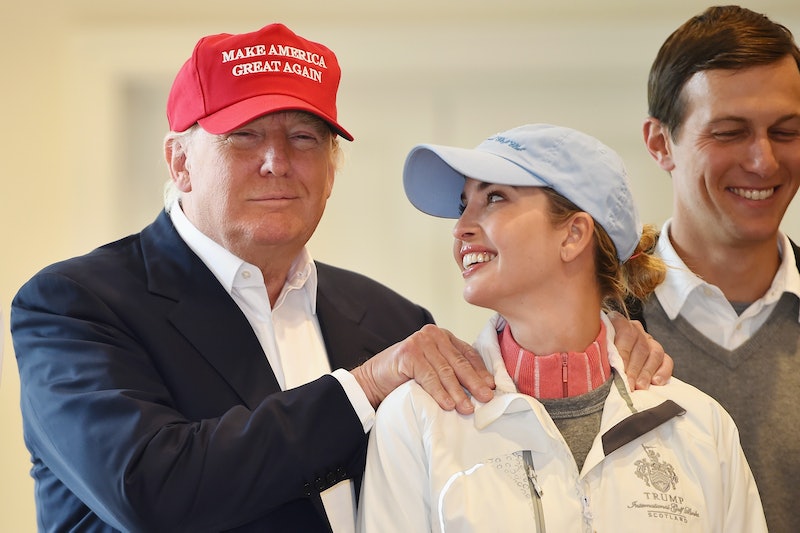 With a slew of candidates for the Republican presidential nomination, odds are that among these candidates' families there is a stellar daughter waiting in line for her own turn as Commander-in-Chief. With the nation's eyes on these candidates during Wednesday's debate, we will probably get a glimpse of a possible future First Daughter. So who are the young women who have been raised by these powerful Republicans? Turns out, there are some pretty ambitious and intelligent GOP daughters we'd love to see run for president in the future.

Sure, everyone already knows Ivanka Trump. She is awesome, a strong feminist, and a working mom. But there are other children of current candidates who could be powerful political leaders in a few decades — Carly Fiorina's stepdaughter and Ben Carson's three sons have successful careers of their own. Several of the Republican hopefuls' daughters are talented young women who have already expressed interested in politics. Others are authors and leaders in business. And even though one was just 2 years old when she said she'd like to be in government one day, there just may be another political dynasty in the making.

Trump, best known of the GOP daughters, is already a celebrity, mogul, and entrepreneur. The 34-year-old has been a writer and a model, but is currently crushing it at her father's company as Executive VP of Development & Acquisitions. Ivanka graduated from the Wharton School of Business in 2004. She started her own jewelry and accessories line, founded a luxury hotel group with her two brothers, and created a lifestyle blog for working women. Fortune Magazine named her one of the top "40 Under 40" in 2014. Oh, and she's also married and a mother of two, expecting her third child next year.

She's the most politically active young woman on the list, and perhaps because of this, the most likely future president. Sarah, 33, is currently running her father's presidential campaign. Based in Arkansas, where her father was formerly the governor, she has experience as the national political director of her father's 2008 campaign and worked as a senior adviser to Republican Sen. Tom Cotton. According to The Hill, the Huckabee campaign has credited Sarah with "directing Gov. Huckabee's Iowa campaign to a landslide upset victory in the Iowa caucuses" in 2008. She's also a mother of three really adorable children.

TIME magazine called her a rising star in politics, but according to her, she has not yet decided on her personal future political career. "I don't know where I will be in 5 weeks let alone five years," she said. "But if I am still working in politics I hope I never lose sight of why I got involved in the first place."

She may only be 7, but little Catherine Cruz is the only GOP daughter to announce her intention to run for president. According to The Washington Times, Ted Cruz recalled a conversation in 2013 while in the car with his family. His older daughter Caroline asked the younger daughter, then 2 just years old, what she wanted to be when she grew up. Cruz said, "[Catherine said] 'I want to work in the U.S. Senate. I want to work with daddy.’" Caroline reportedly replied the job of senator would be "boring," and "besides, Daddy will be dead by then."

Allison is not currently involved in politics, but with an already strong career as a journalist and author, things are just getting started for the 31-year-old. The daughter of George Pataki graduated cum laude from Yale University where she studied English and went on to write for The Huffington Post, ABC News, and Fox News. She has written two novels and has one forthcoming based on the life of a Hapsburg empress. She is also the ambassador for an organization called ReConnect Hungary, which sends young Hungarian-Americans and Hungarian-Canadians to Europe to get to know their heritage. Allison currently lives in Chicago with her husband.

A self-described "Catholic, Conservative and Speaker" on her Twitter page, 23-year-old Elizabeth is a jill-of-all-trades. She graduated magna cum laude from the University of Dallas. In 2012 at age 20, she spent a year campaigning for her father Rick Santorum's Republican presidential primary candidacy and appeared on several news media outlets to speak for his campaign. She also co-authored a memoir with parents Rick and Karen called Bella's Gift. It's a heartwarming story of the Santorum family's youngest child Isabella, who was born with a genetic condition that left her permanently in a wheelchair. According to the book's website, Elizabeth worked as a missionary in Uganda, was a John Jay Fellow, and "absolutely loves being a big sister" to Isabella.

With strong women like these possibly in the White House in 2016, the future looks bright for feminism. Even if these women don't run for president, an American political sphere that includes one of them could make it easier for us all to shatter the glass ceiling. Here's to an Ivanka Trump-Sarah Huckabee ticket in 2040!