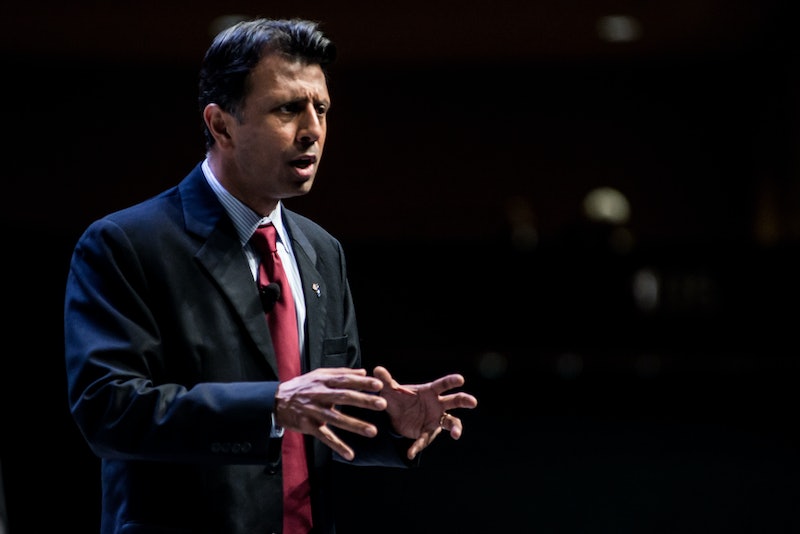 On Wednesday night, Republican hopefuls discussed their economic policies at the CNBC-hosted debate. We are just climbing out of one of the worst recessions since the Great Depression, so American voters were especially tuned in to hear what the possible future president had to say about taxes, the deficit, job creation, and other financial matters. As in the last two GOP debates, the crazy-big pool of Republican candidates was split into two separate forums based on their numbers at the polls. Louisiana Gov. Bobby Jindal qualified for the lower-tier debate, as he did in the last two elections, along with Rick Santorum, George Pataki, and Lindsey Graham. In his closing remarks at the third debate, Bobby Jindal summed up his main message to conservatives, which was basically, that America is headed down a terrible path — and leading the way, he claims, is none other than Hillary Clinton.

Jindal had previously threatened to boycott the debate entirely, protesting CNBC's qualifying criteria as unfair as it has kept Jindal from debating front-runners Donald Trump, Ben Carson, and others so far. As of Wednesday, based on a CBS/New York Times poll, Jindal has less than 1 percent of Republican primary votes. Currently Carson leads with 26 percent and Trump follows with 22 percent. Jindal ultimately did decide to participate, though, and on Wednesday night he ended his performance with the following closing remarks:

My message is to conservatives: this is our hour. Thanks to the insanity, the incompetence of the Democratic party, the American people are ready to turn our government over to us. It's not enough to elect just any Republican however, the reality is the idea of America is slipping away. As Christians we believe that the tomb is empty. As Americans we believe that our best days are always ahead of us. And they can be again. We must win this election. We cannot allow Hillary Clinton to take us down this path towards socialism, further down this path. I've got the courage to apply our conservative principles. I can't do it alone, with your help, with God's grace, we can save the idea of America before it's too late.

While Jindal's closing statement was about as enthusiastic as the candidate typically gets, his remarks — along with his debate performance — likely weren't enough to sway Republican voters his way. After all, thanks to a pretty fiery hour on stage, much of Twitter had Sen. Lindsey Graham pegged as the winner by the night's end. And considering the latest polls have Jindal nearly dead last in the GOP race, this might be the last we'll hear from the Louisiana governor for some time.