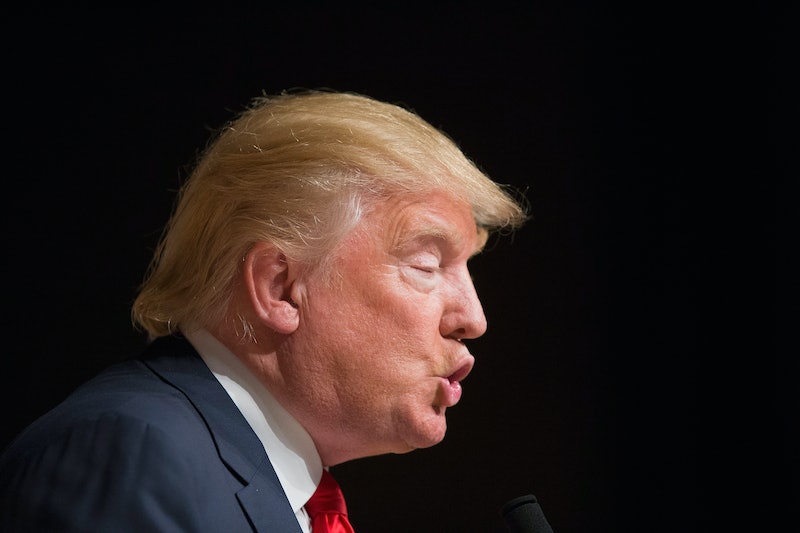 The third Republican presidential debate is coming up, and this one will focus exclusively on the economy. Admittedly, economics can be a dry subject, but oddly enough, that can result in much more interesting debates — if for no other reason because of how often politicians commit embarrassing gaffes while discussing economic policy... which brings us to Donald Trump. The GOP frontrunner frequently boasts of his own financial prowess, and insists that if elected president, he'll "make this country rich again." But it's, umm, not clear that this is true. Trump's dumbest quotes about the economy — and there are many — make clear that, while he's undeniably been very good at accumulating wealth for himself, that sort of business acumen doesn't necessarily translate to sound economic policies at the federal level.

It's long been noted that Trump, despite his significant boasting and popular support, has been rather vague on the issues themselves. The "positions" page of his campaign site, for example, only lists three areas of policy: immigration, the Second Amendment, and tax reform. The last one is the closest thing he has to a full economic plank, but even it only addresses one issue of the economy (taxes). For a fuller picture of how a President Trump would handle economic matters, let's get it straight from the horse's mouth.

On Raising The Debt Limit

"I would be asking for a very big pound of flesh if I were the Republicans." — Fox News Sunday

Republicans have tried this on multiple occasions. It's a very dangerous game, and equally importantly, it's never once worked.

On What, Specifically, He Would Demand In Exchange For A Debt Ceiling Increase

"I want to be unpredictable." — Fox News Sunday

That may be so. But if you're running for president, shouldn't voters know what your positions are?

When Asked Whether He'd Wage A Trade War With China

This is redundant: By definition, all is fair in love and war.

On How He'll Save Social Security

"Through capability. We will set it up by making our country rich again." — 60 Minutes (CBS)

Oh, so all we've got to do is make America rich; then, saving Social Security will be a snap. It's the perfect plan, other than the complete lack of policy details.

On Reigning In Military Costs

"I'm gonna build a military that's gonna be much stronger than it is right now. It's gonna be so strong, nobody's gonna mess with us. But you know what? We can do it for a lot less." — Meet The Press (NBC)

This goal, itself, is admirable. Promising to accomplish it without providing any specifics is not.

On Getting Mexico To Fund A U.S.-Mexico Border Wall

"Do you know how easy that is? They'll probably just give us the money." — Hannity (Fox News)

Some general advice for presidential candidates: Don't propose funding plans that rely on the word "probably." It doesn't sound presidential.

"I will be the greatest jobs president that God ever created." — his June campaign announcement speech

This sort of implies that God personally wants Trump to be president notwithstanding, which is odd. Then again, maybe the idea is that God himself will simply bless the good people of America with more jobs if they're wise enough to elect Trump. Or is the idea that God will use Trump as a vessel through which to enact pro-jobs policies? It's a mystery.

On How To Accumulate Wealth

"Rich people are rich because they solve difficult problems." — from his book Think Big And Kick Ass

What about people who get rich on Wall Street through credit default swaps, or high-frequency trading, or other controversial Wall Street practices? They don't really solve any problems, other than the problem of not being rich enough.

On Adhering To The North American Free Trade Agreement

"We will either renegotiate it or we will break it. Because, you know, every agreement has an end." — 60 Minutes (CBS)

As interviewer Scott Pelley pointed out, "you can't just break the law," which is what Trump was seeming to propose. Another general rule for presidential candidates: Don't reveal that you plan to break the law on the campaign trail. At the very least, wait until you get into office.