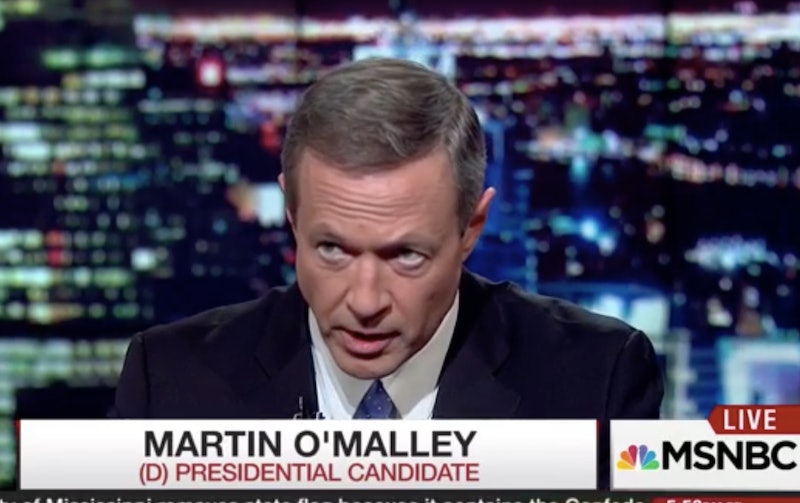 The latest video to showcase an incident of force between a law enforcement officer and a young black teen has reignited all kinds of feelings about police brutality, but Democratic presidential candidate Martin O'Malley's reaction to the incident at Spring Valley High School in Columbia, South Carolina, showed how politics should never get in the way of human decency. The former Maryland governor's initial response was caught during MSNBC's All In With Chris Hayes as host Chris Hayes played the clip for O'Malley during a routine campaign interview Monday evening, just hours after the video began to go viral online.

Before playing the video, Hayes prefaced the clip by saying investigators are still looking into what caused the violent confrontation. Hayes then showed the clip of an officer identified as Deputy Ben Fields forcibly slamming a young girl to the ground and then dragging her across the floor of her classroom to be handcuffed. As the clip wraps, we cut back to a visibly disturbed O'Malley. With his head bowed down and his eyes glaring up, the former Maryland governor gave some choice words as he shared his point-of-view.

As a parent and as a father, I would be ripped ballistic if somebody did that to my daughter. That's pretty outrageous behavior. That's my reaction to that. ... That's not appropriate behavior for any adult to treat a kid. My oldest daughter is a teacher in Baltimore City public schools, I have visited classroom after classroom — there's no excuse for that sort of behavior.

As a candidate running for president, O'Malley could have given a more politically correct response, one that acknowledges the upsetting footage but footnotes his remarks with a "we don't know everything." But instead, what we got was an honest reaction to what is a pretty brutal instance of a girl being thrown across a room by a grown man who's an officer of the law. The transparency exhibited by O'Malley is the kind of character I'd want in my next president. Sure, O'Malley's own record on police brutality as mayor of Baltimore could fall either way, but at least he's saying something about it now.

In reference to the incident, James Manning, Chairman of the Richland School District Two Board of Trustees, released the following statement to Bustle Monday evening:

I have watched the video several times and there is no doubt that the video is extremely disturbing. The amount of force used on a female student by a male officer appears to me to be excessive and unnecessary. As the parent of a daughter in Richland School District Two I can assure you that we are taking this matter very seriously. The district superintendent has been in constant contact with the Richland County Sheriff to express our concern over this matter and the district has banned the deputy in question from all District Two property. The Sheriff has assured us that a full investigation is under way and that he wants the same questions answered that we all have about this matter.

Some have interpreted O'Malley's response as a way of condoning disobedience to law enforcement and have criticized the Democrat for not having all of the facts. After all, some Twitter users argued, the girl did not appear to follow the officer's instructions to leave the classroom. But whether or not she disobeyed the officer's instructions, as O'Malley said, "That's not appropriate behavior for any adult to treat a kid." The officer doesn't appear to be threatened by her or anyone else in the room; how it went from zero to 60 in a matter of seconds is mind-boggling, and O'Malley isn't alone for thinking so.

Image: All In With Chris Hayes/MSNBC