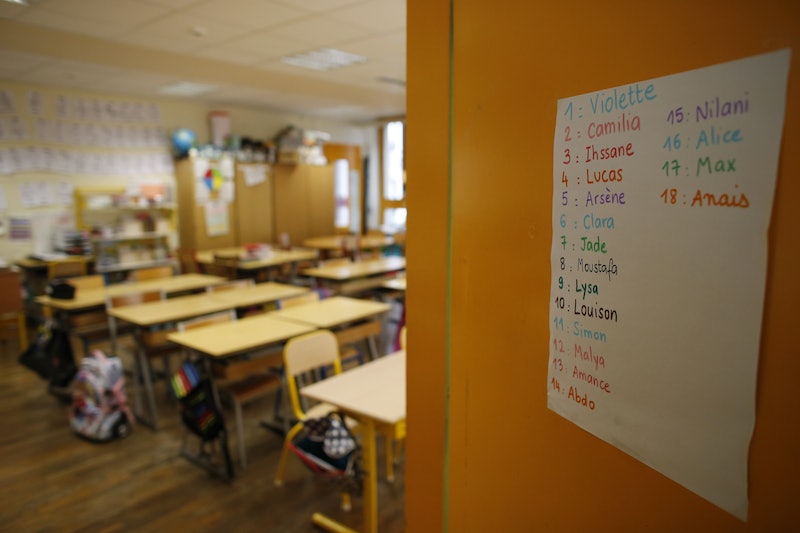 A video out of Columbia, South Carolina, that depicts the violent arrest of a young black girl in her school classroom spread rapidly around the Internet on Monday after activist Shaun King shared the video on Twitter. The video of the young Spring Valley High School student being forcefully grabbed around her neck, flipped in her desk, and pulled onto the floor by a white male officer is very upsetting to watch. The controversy surrounding the events shown in the video has lead to the SRO, Richland County Deputy Ben Fields, to be placed on administrative leave while the traumatic event is investigated. The Spring Valley student who was arrested has not yet been identified by local police, the school, or her family.

Regarding the violent arrest, Richland County Sheriff Leon Lott told local news station WIS-TV, "The student was told she was under arrest for disturbing school and given instructions which she again refused. The video then shows the student resisting and being arrested by the SRO." Niya Kenny, a student in the class where the video was recorded was also arrested for "disturbing school" after she says she attempted to stand up to the officer gave an account of her classmate's arrest and Fields' actions to local news station WLTX. In an interview with WLTX, Kenny said that the unidentified student was asked to leave the classroom because she was not participating in class. When she did not leave the room, Fields was apparently called in, and the events depicted in the video ensued.

The video has sparked intense controversy and concerns from activists, students, parents, and the local police. Several presidential candidates have weighed in on the student's arrest. Democratic candidate Martin O'Malley told MSNBC that he would be "ripped ballistic if someone did that to my daughter. That's pretty outrageous behavior." Democratic front-runner Hillary Clinton retweeted a Tweet that reads: "What could justify treating a child like this? Nothing. Every child should be safe in our classrooms."

In a statement Bustle received from James Manning, Chairman of the Richland School District Two board of trustees, Manning called the video of the student's arrest "disturbing," and noted that Deputy Field has been banned from all district property. Manning concluded his statement by stating:

I want to assure you that the Richland Two Board and District staff are committed to the safety of all of our students and are taking immediate steps to ensure that our students are treated with the full respect and dignity that they deserve while in our care.

Manning also stated that the Richland County Sheriff had commenced an investigation.