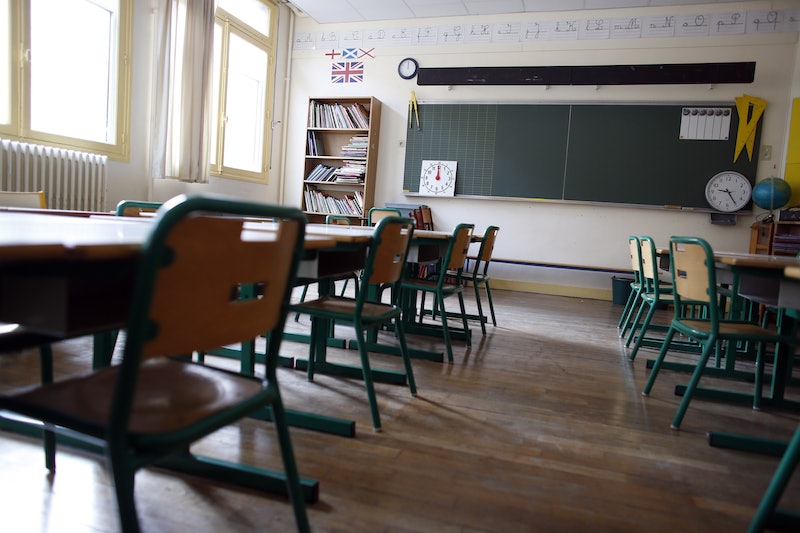 Two other versions of the video taken during the Spring Valley High School incident came out Monday night. Both show the same basic altercation in the South Carolina classroom. As seen in the original video, a white, male school resource officer tells a black, female student to go with him. She refuses and stays put at her desk. Then the officer grabs her around the neck, flips the desk over, and then forcibly places her under arrest. Both videos add a little more context to the story, although specific details remain unclear.

In one of the other videos released Monday night, you can see the interaction leading up to the arrest. He does engage with her several times, over at least 30 seconds, before attempting to remove her physically, although the transition to a chokehold seems to come without warning. You can hear the officer say, "I treated you fairly." The video is unedited and longer, taken from slightly behind the girl's desk. It starts before the initial version had and includes more dialogue between the officer and student. In the other new video — taken from yet another angle, slightly in front, and currently being shared on Instagram — shows the student punching the officer after he grabs her around the neck.

Richland County Sheriff Leon Lott has asked the FBI and the Justice Department to investigate the incident. Meanwhile the deputy in question, Ben Fields, will not be working at the school or for the department pending the investigation. The sheriff's department provides the school resource officers to the department. "It's very disturbing what happened today. It's something I have to deal with and that's what we're going to be doing," Lott told local TV station WLTX.

Two students were arrested. The girl who was physically taken into custody in the video and another girl who identified herself as Niya Kenny, 18. Both were charged with disturbing schools. Speaking with WLTX, Kenny said that she was standing up for her classmate when she was arrested.

"I had never seen nothing like that in my life, a man use that much force on a little girl. A big man, like 300 pounds of full muscle. I was like 'no way, no way.' You can't do nothing like that to a little girl," Kenny told the TV station. Kenny also took a six-second video of the initial arrest. She also verbally objected, which she says may have led to her arrest.

In a statement given to Bustle, Richland School District Two Superintendent Dr. Debbie Hamm said, "Our District is deeply concerned about an incident that occurred at Spring Valley High School today. ... Student safety is and always will be the District’s top priority. The District will not tolerate any actions that jeopardize the safety of our students."

More like this
Chris Kaba's Family Continue Fight For Justice After Viewing Police Bodycam Footage
By Sophie McEvoy
Black History Month UK’s 2022 Theme Calls For Action, Not Words
By Maxine Harrison
Kidnapping Victim Jan Broberg Is Prepared For A Friend Of The Family Criticism
By Brad Witter
Gabby Petito’s Family Responded To The New Lifetime Movie About Her Final Days
By Grace Wehniainen
Get Even More From Bustle — Sign Up For The Newsletter