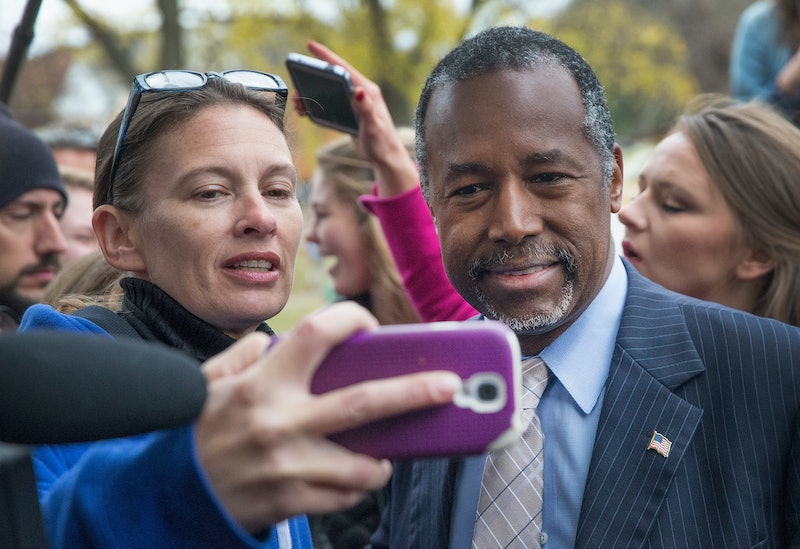 The third installment of the Republican presidential debates will take place on Wednesday, where the GOP candidates will convene in Boulder, Colorado, to discuss economic issues on CNBC. Of course, one candidate to keep an eye on is Ben Carson, who has had recent success in the polls that even show him ahead of Donald Trump in Iowa. The spotlight is apparently a comfy spot for Carson, which we now know because... Guess what? Okay you'll seriously never ever guess but: Ben Carson has been in a movie. With Matt Damon. And Cher. Ben Carson was in Stuck On You! Do you remember that ridiculous movie with Matt Damon and Greg Kinnear about conjoined twins, one of whom wanted to be a Hollywood actor? Ahhhh, it's just so weird I can't contain myself!

Carson had lines and everything, and was actually touched by Eva Mendes on screen (well, shoved. You go, Eva!). It's just too bizarre. In his big scene, Carson dramatically mimes to another doctor what will happen during the surgery, then ties on his surgical mask as Damon and Kinnear lay on the operating table. Carson later goes out to the waiting room to tell the girlfriends of Damon and Kinnear (Mendes and Wen Yann Shih) how the surgery went. In a classic hospital setting trope, Carson tells the women "we've lost them," referring to not knowing where the twins had been moved after the operation. When another doctor comes over to tell Carson where the twins are, he tells the women that the surgery was "a smashing success." Then Mendes shoves him. It's so great.

You can also watch the clip here.

The next scene is Carson flashing his biggest, best Hollywood smile (practice for politics, perhaps?) from the back of the room as the twins wake up and make corn jokes with their girlfriends. Smashing success!

Before the movie premiered in 2003, Carson told The Baltimore Sun that "If it was going to be raunchy or offensive, or degrading or demeaning to anybody, I wasn't going to do it. This was actually a little different. I think people will be quite touched by it, it's actually quite a sensitive movie."

In a way, Carson is the first person that ought to come to anyone's mind when the subject of separating conjoined twins is at hand; he was, after all, world famous for his operations and developments in that specific area. But why not just get an actor?! It's not as if Carson had to deliver any super special neurosurgeon lingo.

The director told The Sun, "why not" hire Carson for the gig. I don't know... maybe because he seems kind of boring when he talks. Either way, the scene is pretty priceless. It's funny to see Carson in a totally different context, and it's also hilarious to see Eva Mendes push him. And Carson looks so incredibly young!

So, on Wednesday when he's rambling something completely awful about the economy and the Fed and our nation's fiscal future (we can be sure Planned Parenthood funding is going to make its way into the conversation), just picture him in some amazing cast photos with Damon, Mendes, and Cher (who was briefly in the movie as well!), and it might make things seem slightly less unbearable. But only slightly... I mean, the movie wasn't that good.